The second round of the NCAA men’s basketball tournament was held all day Thursday. While some teams looked to stay dominant as number one or two seeds, other teams looked to become this years Cinderella story.

The night, however, belonged to the underdogs. Lower seed VCU picked up right where they left off last season. 12th seeded Virginia Commonwealth and head coach Shaka Smart pulled the surprise upset by defeating Witchita State 62-59. Yes, the same team that made it all the way to the final four last season looked just as good as it did the previous season, beating the WSU Shockers. The Shockers entered the game as a respectable number five seed in the south region after being crowned the regular season Missouri Valley champs. Even with the confidence of the championship, the Shockers were shocked right out of the big dance.

The other upset of the night also came from the south region. Bracket busting Colorado in the 11th seed knocked off 6th seeded UNLV. The Buffaloes started the NCAA tournament with the same momentum which carried the team through the PAC-12 tournament. Having won their last five games, Colorado is actually looking like a viable team in this tournament.

Continued coverage of the second round can be heard all day today on WRUF SportsRadio 850. Make sure to tune in to the station for the rest of March Madness as well as WRUF will continue covering the NCAA tournament throughout the entire month. 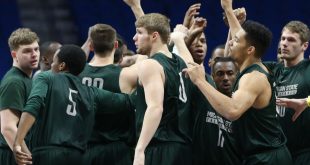 Embrace the madness as the NCAA tournament is officially underway. In first round action the …