The Florida women’s basketball team hung tough for a half against the overall number one seed in the NCAA Women’s Tournament but in the end Baylor ends up beating Florida 76-57 to end its season.

The Gators only trailed by eight points at the half but that’s when Baylor’s 6’8″ junior center Brittney Griner went to work.   She scored 18 second half points, including two on a one handed dunk, to help the Bears advance.

Florida ends its season at 20-13 and senior Azania Stewart goes out with a nice game, leading Florida with 14 points while guard Deana Allen adds 13.   Baylor improves to 36-0 on the season. 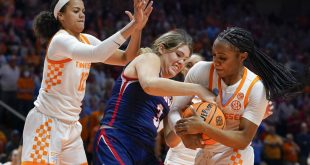