The Tennessee Volunteers are in Lexington tonight taking on the Kentucky Wildcats in men’s college hoops action.  Both teams have struggled so far this season.  The Vols have an 8-6 record and are looking for their first win in the SEC while Kentucky is 10-5 and 1-1 in the SEC.  Both teams are coming off losses this past Saturday; Tennessee is coming into Rupp Arena after a close 68-65 defeat to Alabama and Kentucky was worn down 83-71 by Texas A&M.

For the Volunteers, junior guard Jordan McRae averages 13 points per game on 44 percent shooting.  Sophomore forward Jarnell Stokes follows with 11 points per game and shooting 52 percent from the field.  Stokes leads the Vols in rebounds with seven a game and junior guard Trae Golden leads the team in assists with four per contest.

Tipoff is set for tonight at 7 o’clock on ESPN. 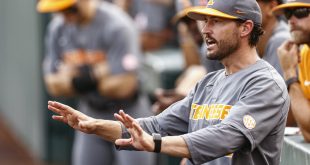