Florida Men’s Hoops wins over Southern, but loses Kasey Hill due to injury

Sports are all about the team. 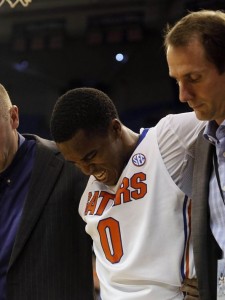 Success is had as a unit, and failure as well. But on Monday night, the big story coming out of Florida’s 67-53 win against Southern won’t be the final score. It will be the fact that the already depleted Gator men’s basketball line up will now be without their five-star freshman and starting point guard Kasey Hill for perhaps the rest of the semester.

Hill had his hands all over the game early on before subjecting himself to what is being diagnosed as a high ankle sprain two minutes into the second half. Before his injury, Hill recorded eight points, three assists and a steal, but was also the instigator of a few key points off turnovers. After the game, Gators senior leader Patric Young said this will have to be an adversity Hill overcomes.

“Yeah, it’s tough, but playing college basketball, no matter what age you are, you’re going hit some type of hardship and some type of adversity,” Young said. “When going through these four years — or however many years it is — he’s going to have to embrace it and keep fighting through it.”

As for Hill’s injury, UF head coach Billy Donovan said they’re not ruling out further damage to be revealed in X-rays Tuesday.

With the future of Florida’s point guard position now up in the air, in part also because senior Scottie Wilbekin is still suspended, the team will most likely look to Dorian Finney-Smith or Michael Frazier II to handle the offense. Finney-Smith is a 6’8″ wing who brings great defensive length to the position, but Frazier is the more experienced ball handler and game manager — despite some poor shot selection this game. After the game, Frazier addressed the possibility of playing point guard for an extended period of time, and he didn’t seem worried.

“I think I can do fine with it. I played a little bit of point guard in high school, I played it in the Wisconsin game. I’m pretty comfortable with it,” Frazier said.

Frazier had just one assist and three turnovers going into tonight’s game.

As for the game itself, Young led all Florida scorers with 12 points, Casey Prather and Finney-Smith added 10 points each.

It was the tale of two halves in Monday night’s match up as the Gators ledd the first half 35-19, out rebounding the Jags 27-14, but then proceeded to let their opponents back in the game, getting outscored 34-32 in the second half and only outrebounding Southern by one at 16-15.

A big part of what helped the Gators get out to that 35-19 lead was their ability to get to the free throw line and be successful there. Finney-Smith was 3 of 4 from the line, and he helped the Gators obtain a 68 percent free throw percentage on the night (13-for-19). He said it feels good to have the ball roll your way, but they have a lot of work to put in to get better.

“It’s very encouraging. We work on it in practice every day,” Finney-Smith said. “Every game we’re trying to make strides, and today was a stride in itself. It was pretty good, but we got to keep working; we got a lot more work to do.”

Florida is currently No. 16 in the latest AP Poll, and its next game will be Thursday night in Gainesville against unranked Middle Tennessee. Tip off for that game is set for 7:30 pm.