Former Florida Gator basketball standout Joakim Noah has been named the NBA’s Defensive Player of the Year. Noah, who averaged a double-double during the regular season, with 12.6 points per game and 11.3 rebounds per game, received 100 first place votes.

The two time All-Star who was named to the first team All-Defensive team in 2013, continued his dominance on the defensive side of the ball this season. Noah averaged 1.5 blocks per game this year, while also leading the team in assists. Noah was quick to credit his teammates for their contributions this year.

“This award is a team award, this wouldn’t be possible without my boy Kirk Hinrich, the old man just picking up full court,” Noah said. “Guys like Jimmy Butler, Taj Gibson, my whole team. I appreciate them through all the adversity that we gone through, to never let up, and just keep fighting. I’m so proud of that, and it’s bigger than awards.”

Noah has become the defensive anchor on a Chicago Bulls team that prides itself on the defensive end. The Bulls allowed a NBA low 91.8 points per game and were second in opponent field goal percentage. Overall, Noah picked up 555 points out of a possible 1,125 to claim the award, but this isn’t the main award that he wants to pick up. He wants to win an NBA championship.

Noah and the Bulls will continue to focus their efforts on the Washington Wizards in their first round matchup in the NBA playoffs. The Wizards currently hold a 1-0 series edge entering Game 2 on Tuesday night. 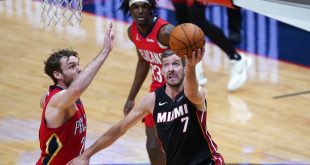