The Florida Gator soccer team will open SEC play tonight in Tuscaloosa.  This will be the Gator’s sixth away game in a row as they take on the Alabama Crimson Tide. Florida is coming into the game with a 5-2 record. The Gators are coming off a two-game weekend where they lost 1-0 in overtime against Stanford, but won 4-0 against New Mexico.

“I think with our team… they had a really positive mind set after the Stanford game,” said head coach Becky Burleigh. “We talked a lot about if you want to be resilient we have to have adversity, because just by the nature of resilience you can’t have it without adversity. So, you know, I think that right now we are a better team at 5-2 than we would be at 7-0.”

Alabama with a record of 5-2-1 is coming off a 2-0 win against the University of Alabama at Birmingham.

“Their attack is just very good. They have a couple players that are just very dangerous and that we’re going to have to keep out eyes on. They’ve played some pretty good competition as well… Virginia is one of them, that they played last weekend, so they are also battle tested,” said Burleigh.

The Gators will be the second top ten opponent Alabama will face this season. The Crimson Tide lost to the then number three ranked Virginia. 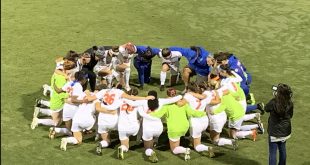