The city’s most notable rivalry highlights the high school football slate this evening. Let’s take a look at the match ups.

Both schools have four wins on the season, the Canes are 44-4 at Citizens Field since 2009, and this will be the 44th meeting between the these two teams. Gainesville had a five game winning streak in the series, until last year when the Bobcats snapped that run with a last second field goal to win 23-20. Buchholz has had extra days to get ready for this rivalry too, as they were idle last Friday.

“I feel really good about having that extra week of preparation before the second half of our season starts up in classic fashion at Citizens Field on Friday night,” BHS head coach Mark Whittemore said.

GHS is coming off a 35-21 road victory over Ocala Forest. The offensive and defensive statistics are about as close as you can get — factor in the emotion for such a big game, and you have all the makings for another tight one in this battle for city bragging rights.

“It’s definitely a pride thing and our senior class wants to go out on top with a win, as does theirs,” GHS head man Mark Latsko said. “Everybody is expecting a great game tonight.”

The Raiders have won three straight games but have lost three straight in the series against the Bulldogs, and haven’t won a game in Live Oak since 2008. Santa Fe head coach Bill Wiles has his offense rolling, averaging over 44 points per game. However, those opponents are a combined 9-13. The Dogs defense might prove to be a much tougher test.

“No disrespect to any of our last three opponents at all, but we know Suwannee is on a little bit different level,” Wiles said.

The Bulldogs are surrendering just 15 points per contest on defense, and have won six of the last eight meetings between the former district rivals.

The Tigers are coming off their sole loss of the year two weeks ago, and it doesn’t get any easier on Friday night as they hit the road to take on the top-ranked team in 4A. Offensive fireworks could be on display this evening — both offenses average over 400 yards and 40 points per game. Both quarterbacks should have plenty of opportunities to sling the ball around as well. Davin Schuck of Columbia and Mac Jones of Bolles have each tossed 12 touchdowns on the season. This will be the inaugural meeting between the two schools. 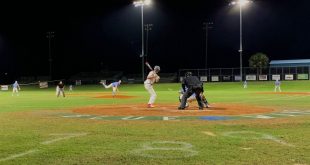