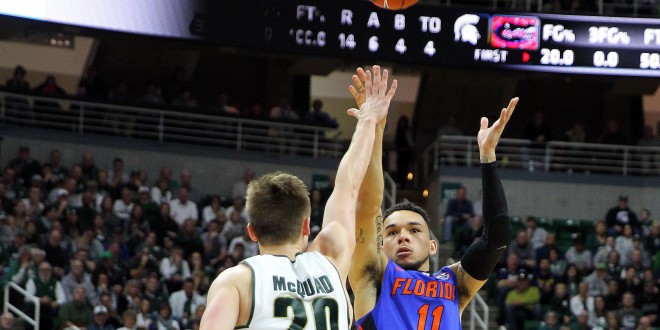 Despite taking a late three-point lead with just under ten minutes left in the contest, the Florida men’s basketball team was unable to pull off a stunning upset over #1 Michigan State, losing to the Spartans in East Lansing on Saturday night, 58-52.  The Gators are now 2-14 against number one ranked teams in program history.

Michigan State’s Denzel Valentine led all scorers with 17 points in 32 minutes of game action, while Kasey Hill and Dorian Finney-Smith led all Florida players with 13 points each. Florida center John Egbunu, UF’s second leading scorer and rebounder this season, fouled out of the game late in the second half with zero points and zero rebounds in seven total minutes of play.

The Gators started the game off zero for seven from the field, and found themselves trailing 5-0 to start the game. Not only did Florida have trouble shooting the rock early in the first half, but by the 17:48 mark, Gator center John Egbunu had two fouls, changing coach Mike White’s game plan as a whole in the first half.

By the first television timeout, Florida found itself shooting tw0 of 12 from the floor, to go along with the fact that another one of their centers, Schuyler Rimmer, had two fouls early on as well. While the Gator shooting was subpar in the first ten minutes as a whole, going three for 19 (15.8%) from the floor, they found themselves in the bonus from the 11:27 mark on in the first half. Florida was able to somewhat capitalize on the Spartans’ early foul trouble, hitting five of eight at the charity stripe. The biggest recurring problem for the Gators in the first half was what had been their bread and butter the entire season before the Miami game, their rebounding. The Spartans out rebounded the Gators 29-19 in the first half, but Florida was still able to grab six offensive boards, helping themselves out tremendously on second chance opportunities.

The game went back and forth in the second half.  Michigan State took an eight point lead, their biggest of the game to that point but a quick 8-0 run by the Gators would tie the game up at 38-38 with 13:52 remaining in the game. While the Gators couldn’t knock down a three in the first half, Chris Chiozza came out with a high energy attack for the Gators to start the final 20 minutes, opening the second half 4-4 from the field, including three 3-point shots.  Florida would take its first lead of the game at the 9:53 mark in the second half, when Dorian Finney-Smith knocked down his first three pointer of the game, putting the Gators up 45-42.

Michigan State would rally to lead 54-50 with 3:27 to go, and the Gators would then turn the ball over on three possessions in a row, allowing the Spartans to take a 56-50 lead with 1:31 left in the game, and the Spartans held on from there.

The Gators shot below all of their season averages in this one, going 33.3% from the field, 22.2% from downtown, and 55.6% from the free-throw line. Florida was unable to make up its minus ten rebounding margin from the first half, with the Spartans out rebounding the Gators 45-34. The Gators’ saving grace in this one, and what kept the game close, was their 12 offensive rebounds and the Spartan’s 12 turnovers. Michigan State was able to move the ball better than Florida in this one as well, racking up eight more assists than the Gators.

Denzel Valentine led all scorers in this contest, putting up 17 points, on a below average 5 of 17 from the field, adding five rebounds as well. While the Gators had four different players in double digit scoring, Kasey Hill and Dorian Finney-Smith led Florida with 13 points each. Devin Robinson came one rebound away from attaining his fourth double-double of the season, putting up ten points and nine rebounds on five of nine shooting. Michigan State outscored Florida in bench points 16-5 as well.