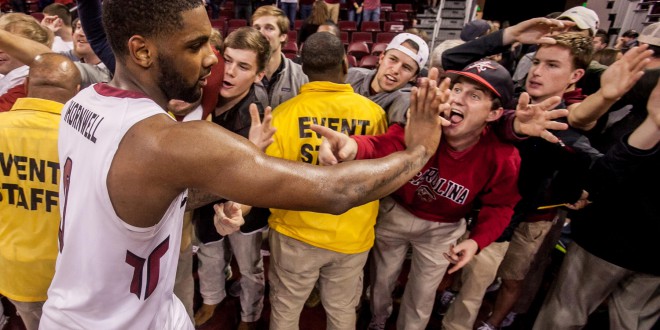 The South Carolina Gamecocks (15-0, 2-0 SEC) and Alabama Crimson Tide (9-5, 0-2 SEC) square off Wednesday night at the Coleman Coliseum in Tuscaloosa in a men’s SEC college basketball match up.

The 19th-ranked Gamecocks have started the season with 15 straight wins and they are two wins from equaling their 1933-34 best mark of 17 straight victories. South Carolina is coming off a tight 69-65 home win over Vanderbilt.

The Gamecocks were not looking good early on as the Commodores jumped to an 8-0 lead on back-to-back three pointers. The eight-point deficit was the largest South Carolina has faced all season.

After the close game against the Commodores that was almost a streak-stopper, the Gamecocks are looking for a smoother match up against the Crimson Tide.

Sindarius Thornwell leads a balanced Gamecock attack, averaging 12.6 points and 3.8 assists while Duane Notice is averaging 11.9 points and 2.2 rebounds. South Carolina is shooting 37.5 percent from beyond the arc and 68.2 percent from the free throw line.

South Carolina coach Frank Martin says he only wants to be a good example for his team.

Alabama is coming off a 77-61 loss against then-No. 9 Kentucky where they failed to reach 70 points for a fifth straight game.

The Crimson Tide got within four in the second half but shot 34.6 percent overall.

Alabama will look for some consistency after splitting their last six games. Alabama is averaging 66 points on 42.8 percent shooting.

And that might be necessary given that Alabama averages 14 points per game less than the Gamecocks so the Tide’s best chance to win might be to make the game a defensive, low scoring affair.