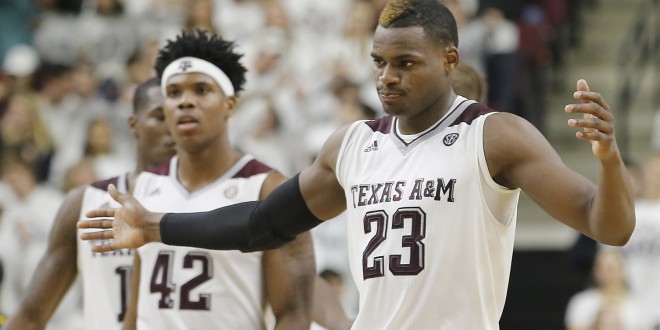 What a couple weeks it has been for the Texas A&M Aggies men’s basketball team. Or how about month, A&M has not dropped a game since December 6, 2015. The Aggies have climbed all the way to number five and the polls and seemingly can’t be stopped. Well Wednesday night they leave College Station yet again to take on Arkansas. A&M head coach Billy Kennedy is ready for a tough test.

Texas A&M has weapons, they can do it in a multitude of ways. Jalen Jones and Danuel House have provided most of the damage thus far. Averaging as combined 32 points and 12 rebounds a game there hasn’t been a team to find an answer to those two this month. Last time out Jalen Jones racked 20 points in a winning effort against Missouri. With Arkansas on the slate Wednesday Billy Kennedy knows Jones is going to have to keep it going.

So what does Arkansas have to do to take down this Texas Titan? The 9-10 Razorbacks haven’t had their best showing in 2016 but they have one thing going for them on Wednesday, home court advantage. The test of winning on the road in college basketball has proven to be tough so far this season. If it is the Razorbacks who come out with an SEC West upset on Saturday look for it to be Moses Kingsley who’s averaging 16 points and over nine boards. Tip off Wednesday is 7 p.m.

Previous SEC PREVIEW: Auburn to Face Ole Miss
Next Heat Defeat the Nets for the Fourth Straight Time in the Barclays Center 102-98