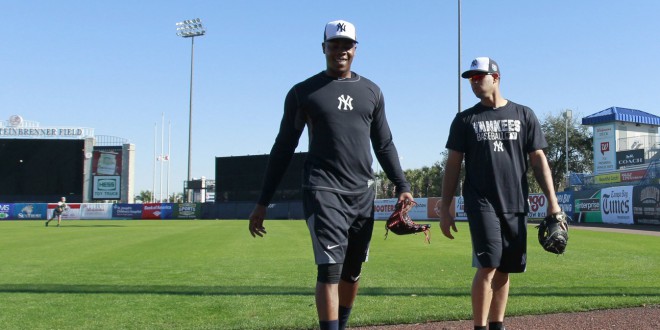 As the winter ice thaws around the country, baseball teams are flocking to warm weather this week for the beginning of spring training, marking the official start of the 2016 MLB season. From the Kansas City Royals’ defense of their championship, to the surprising big-spending Arizona Diamondbacks, there is no shortage of story lines as fans eagerly await Opening Day on April 3.

Chief among these story lines are the Tampa Bay Rays,  who are trying to bounce back from a fourth-place finish in the American League East. While the notoriously low-budget Rays didn’t sign any impact free agents, they acquired outfielder Corey Dickerson from the Colorado Rockies to help bolster their offense.  ESPN baseball analyst Jayson Stark says that trade, along with a deadly pitching rotation, can be key for the team this season.

The Rays, led by young ace Chris Archer, were fourth in the AL in ERA and strikeouts but their bats lagged behind, ranking no higher than 14th in MLB in average, on-base percentage or slugging.

About 140 miles east of the Rays’ spring training facility, another team is hoping for a rebound season. The Miami Marlins fell far short of 2015 preseason expectations when they finished 20 games under .500 (71-91), good for a disappointing third place in the National League East.

Unlike the Rays, however, the Marlins have a core of talented hitters cemented by the reigning NL hits and stolen base leader Dee Gordon and perennial home run threat Giancarlo Stanton. But Stanton, along with ace phenom Jose Fernandez who returned last season from Tommy John surgery, are dragged down by health concerns. Stark says for the Marlins to succeed, Fernandez and Stanton need to stay on the field.

The Marlins, who ranked second to last in home runs in all of baseball last year, are moving in and lowering the fence in certain areas of Marlins Park for the 2016 season to help alleviate their offensive woes. Along with the shorter dimensions, the addition of home run king Barry Bonds as hitting coach is all the more reason for Stanton to stay healthy, Stark said.

If the Marlins hope to reach the World Series, there’s a chance they’ll run into the San Francisco Giants. Bolstered by the big free-agent signings of pitchers Johnny Cueto and Jeff Samardzija, Stark said they could be the team to take home the title this season. The Giants, capitalizing on even years, won in 2010, 2012, and 2014.

Pitchers and catchers began reporting on Feb.18. Full squad workouts don’t begin until Feb.23 with spring training games not far behind kicking off on March 1.

If you googled Sean Kazmar Jr. last week, what you may have come across were …