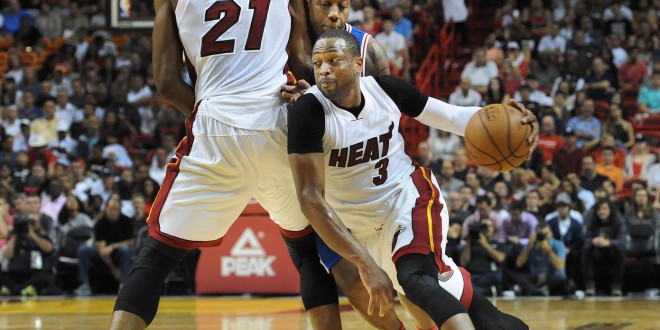 The Miami Heat edged out the Philadelphia 76ers 103-98 in Miami last night. The first half was all Miami. In the first quarter, the Heat were the first to score and ended the first 12 minutes on top, 40-29. Miami was still leading 59-49 at the half, but the Sixers started to step up.

The Heat missed 10 consecutive shots in the second half, going almost 8 minutes without a basket. The 76ers took advantage of that and tied the Heat half way through the third quarter. The Heat came back to end the third to come on top 84-77.

In the fourth, both teams continued to score and stay within a few points of each other. In the end, the Heat topped the Sixers 112-102.

Luol Deng led the Heat with 14 rebounds in Sunday’s game. His ability to get rebounds adds to what the Heat have. Hassan Whiteside was also instrumental with 13 rebounds and seven blocks. This is the 76ers’ twelfth loss in a row and they continue to have a hard time as they have NBA’s worst record of (8-55).

With a little over a month in the season, the Heat have the playoffs in their minds. The Heat are currently first in their division, but they know that they still need to work in order to be ready. In order to be mentally ready, .

Goran Dragic knows that as the playoffs come closer, they are going to know their opponents and their opponents will know them. The Heat had some practice with this when they played Philadelphia for second time in three nights.

The Heat have a five-game winning streak as they head to Milwaukee for Wednesday’s game. Tipoff against the Bucks will be at 8 p.m.