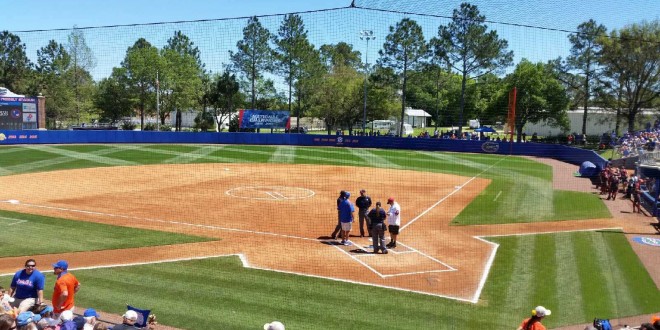 After a sweep of Ole Miss over the weekend, No. 1 Florida (38-3) is looking to add momentum as they play No. 8 Florida State (31-4) Wednesday night. This is the first meeting of the season for these in-state rivals and top-10 teams.

Florida has dominated in nonconference play. They are undefeated in 26 nonconference games and have won 117 of 119 games, dating back to 2013. Florida has also beat Florida State in 14 of their last 15 meetings. The last time these teams met last season, Florida won 5-0.

When it comes to defense, double plays have also benefited both teams. Florida has turned 19 double plays and FSU is close behind with 17. Walton recognizes how well FSU has been fielding in addition to their pitching.

The long ball is also a friend to both teams. So far this season season, Florida has hit 35 home runs. Over this past weekend alone at Ole Miss, Florida hit eight home runs. Florida head coach Tim Walton hopes this hot streak continues at home. Florida State only five behind with 30 home runs on the season.

Florida State is not only a home run and double plays threat, but they are also a stolen base threat. The Seminoles have stolen 89 bases with 101 attempts. Florida State outfielder Morgam Klaevemann alone is 30-33 when stealing bases. The Gators have allowed only three stolen bases through 41 games; the fewest allowed in school history.

This is the first game in an eight game home stand for the Gators, including a weekend off from SEC play. First pitch for Wednesday’s game between the Gators and Seminoles is scheduled for 7 p.m. in Gainesville.

Senior telecommunication and history major at the University of Florida and contributor for ESPN Gainesville 95.3. Baseball and hockey are my favorites, but I love all sports.
@MichelleSpring6
Previous Preview: Lightning Prepare for Playoff Game Against Red Wings
Next Kobe Bryant’s Farewell Tour Ends Wednesday