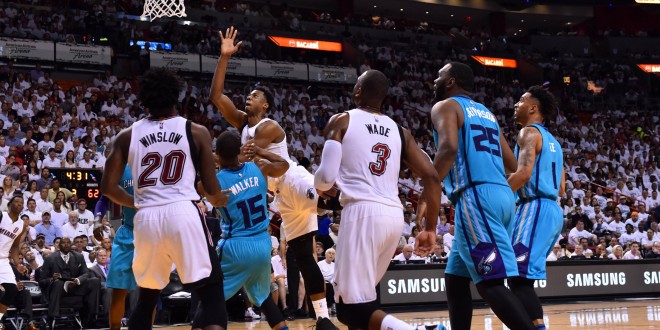 Apr 17, 2016; Miami, FL, USA; Miami Heat center Hassan Whiteside (21) is fouled by Charlotte Hornets guard Kemba Walker (15) during the second half in game one of the first round of the NBA Playoffs at American Airlines Arena. The Heat won 123-91. Mandatory Credit: Steve Mitchell-USA TODAY Sports

The Miami Heat will look to take Game 2 of their NBA playoff series with the Charlotte Hornets Wednesday night in Miami.  The Heat defeated the Hornets on Sunday 121-93 in Game 1.

Miami followed their game plan and played extremely well as Luol Deng scored 31 points and Hassan Whiteside added 21 points and 11 rebounds for the team. Meanwhile the Hornets were not good offensively, only making six 3-pointers on 17 attempts.  Nicolas Batum led the Hornets with 24 points while guard Kemba Walker chipped in with 19.

The Heat might have won Game 1 early after taking a 19 point first quarter lead that the Hornets never recovered from as Charlotte shot 43 percent for the game as compared with Miami’s 57 percent.   Another area of concern for the Hornets might be the rebounding category after they were outrebounded by the Heat 42-28 in Game 1.

The attention has turned to Game 2. pic.twitter.com/asiG8RMGXG

Tip off is set for 7 p.m. and you can watch the game on SUN, FSSE, and NBATV.