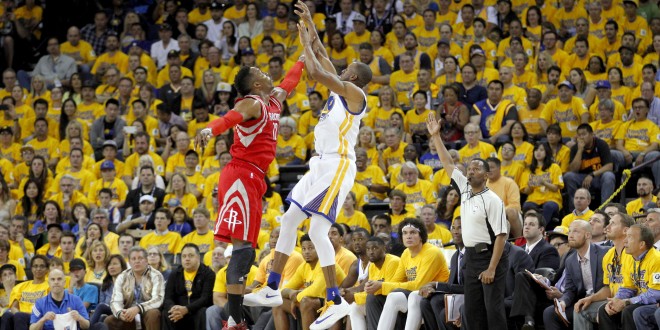 The NBA playoff games Monday night included a comeback, a game-winning shot, and a player stepping up when a man was down.

The first game of the night started with a comeback — by the Toronto Raptors to even its first round-playoff series with the Indiana Pacers.

The Raptors, a favorite in Game 1 of the Eastern Conference playoff match up, were beaten by the Pacers 100-90 on Saturday. The Raptors showed up to win on Monday.

The Pacers’ Monta Ellis made a 17-foot two-point shot to bring the Pacers up 6-4 early in the first quarter, the last time the Pacers led in the game.  Toronto’s Norman Powell made a three point jumper to put the Raptors up 7-6, and they never trailed again as they went on to win 98-87.

Jonas Valanciunas says the Raptors aren’t going to get carried away from the joys of winning Game 2.

The Raptors head to Indianapolis to take on the Pacers Thursday night. Tip off is scheduled for 7:30.

In the second game of the playoff games Monday night, there was a game winning shot  — that was waived off by officials. The Oklahoma City Thunder thought they had gone up 2-0 on the Dallas Mavericks after a last-second put-back layup by Thunder center Steven Adams.

The ball was in Adams palm as time expired — and the Mavericks stunned the Thunder and head coach Billy Donovan with an 85-84 road win.

The Mavericks tied the Western Conference playoff series at 1-1. As a 14-point underdog, the Mavs pulled off biggest NBA playoff upset in 20 years.  Mavs head coach Rick Carlisle says the team did a bit of self reflecting after its 108-70 loss in Game 1 and realized they had to make some changes.

The Mavericks host the Thunder for Game 3 of the series Thursday night. Tip off is scheduled for 7.

In the final game of the night, a player stepped up while his teammate was down; that player was Golden State Warrior Klay Thompson and the teammate was Stephen Curry.

Curry, who was out of the game with an ankle injury, didn’t seem to be missed by his teammates. Sure, they could have used him on the court, but the Warriors were fine without him.

Thompson scored 34 points and dished out five assists in the Warriors 115-106 win against the Houston Rockets in Game 2 of their Western Conference playoff series. The Warriors also got help from forward Andre Iguodala, who scored 18 points including four 3-point shots.

Houston guard James Harden scored 28 points but they weren’t enough to take down the Warriors, who are now up 2-0 in the series.

Warriors head coach Steve Kerr says the win was possible because of his team’s effort and players stepping up.

The Rockets host the Warriors Thursday night with tip-off scheduled for 9:30.

Previous Game Two Preview: Miami Heat vs Charlotte Hornets
Next Will They Play Together Again?