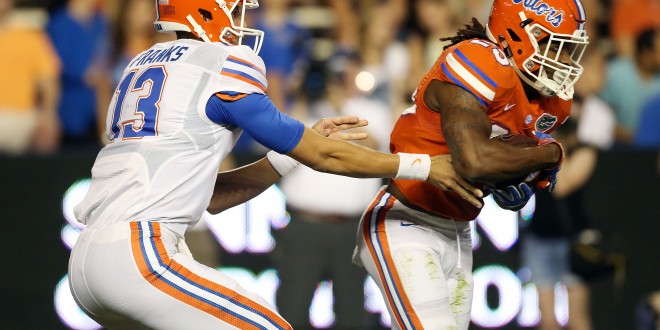 The Florida Gator football team is fresh out of spring ball after wrapping up its Orange and Blue Debut in The Swamp. ESPN Gainesville/95.3 FM caught up with head coach Jim McElwain today and he discussed his thoughts on the Gator spring practices.

McElwain mentioned how he  is pleased with the progress players have made from last season until now; he is entering his second season as head coach for Florida and guided the Gators to a 10-4 record and the SEC East division title last year.

With four quarterbacks to choose from, the question on everyone’s mind is “who will start in the season opener against Massachusetts?” Will it be Luke Del Rio, Austin Appleby, Feleipe Franks or Kyle Trask? Although McElwain has not named a starter entering preseason practice in August, he says all four need to accept the responsibility of perfecting their craft and need to feel comfortable throwing the ball.

McElwain says he has the most familiarity with Del Rio since he’s known the quarterback since eighth grade and says he grew up in football and has intangibles.

McElwain also says Appleby’s  intelligence as a player in the Big 10 and ability to understand the concepts make him a strong candidate.

When it comes to solidifying another spot at cornerback opposite Jalen Tabor, Coach Mac is confident in Quincy Wilson’s abilities. McElwain says Wilson demonstrates a drive to secure the position.

In terms of losing expected top round draft pick Vernon Hargreaves, McElwain says he is irreplaceable, but there is top-line talent and Wilson and Duke Dawson both had fantastic springs.

In the linebacker position, McElwain says there is depth and development with young guys like David Reese, Kylan Johnson, and others who are working behind starters Jarrad Davis and Alex Anzalone.  Daniel McMillan could also fit in that mix. and McElwain says he did really well and stepped up during spring ball.

Fans at the spring game got a “kick” out of new placekicker Eddy Pineiro who boomed several kicks through the uprights and several deep balls on kickoffs but McElwain says they need to put Pineiro in as many game time situations as possible instead of controlled environments.

What lies ahead for the Gators? The team is still developing and McElwain explained that a team is truly made over the summer and it’s the most important time of the year. He says you won’t see what the finished product will look like until camp, but so far he likes the dynamic and leadership of the team.

Florida will host the UMass on September 3rd in its 2016 season opener.