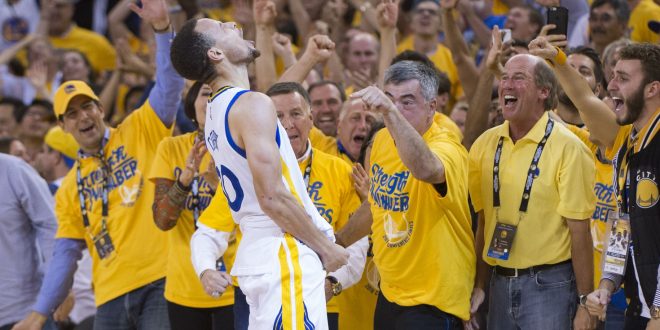 The Oklahoma City Thunder shocked the basketball world this postseason by taking a 3-1 lead against the Golden State Warriors in the Western Conference Finals. However, the Warriors’ historic season will continue after beating OKC three consecutive times—including last night’s 96-88 win at Golden State.

Only nine other NBA teams have ever come back from a 3-1 deficit to win a postseason series. If NBA fans had a shred of doubt before, now there is no denying that the talented Warriors are capable of handling pressure and coming together as a unit.

Steph Curry was phenomenal in the Game 7 victory: tallying 36 points and eight assists, while only taking three free throws on the night. With seven shots made from behind the arc yesterday and 32 total, Curry broke yet another NBA postseason record for the most three point shots made in a seven game series.

The first Game 7 on #WarriorsGround in 40 years was a classic! Relive some of the top moments.https://t.co/SOkfOD2W6j

Meanwhile, Kevin Durant and Russell Westbrook only combined for 46 points on the night and OKC’s starters shot at just above 38 percent from the field. The Warriors’ starters faired a bit better, hitting almost 44 percent of their field goal attempts. Golden State’s bench also outperformed OKC’s, the Warriors’ subs added an additional 19 points.

However, the difference in this game was due to a personnel change made by Steve Kerr. In an unexpected move, Andre Iguodala joined Golden State’s starting lineup for only the second time this season. Kerr’s gamble paid off and Iguodala was able to contain one of the NBA’s premier scorers in Kevin Durant, holding the former MVP to only five shot attempts in the first half.

Many people will look back on this series and wonder if the Thunder blew a 3-1 series lead or if Golden State simply orchestrated a fantastic comeback. Truthfully, it was a bit of both. Russell Westbrook and Kevin Durant will continue to be scrutinized as two superstars who can’t seem to deliver clutch performances, which may ultimately lead to Durant’s departure when he enters next season as an unrestricted free agent.

Looking forward, the Golden State Warriors ended up exactly where everyone expected them to be. The 2016 NBA Finals will be a rematch between the defending NBA Champion Golden State Warriors and the Cleveland Cavaliers. Only this time, the Cavs will begin the matchup with a healthy lineup.

With Kevin Love and Kyrie Irving along for the ride to help LeBron and company, the NBA Finals may end up drastically different than last season.

Game 1 of the NBA Finals will tip off Thursday, June 2 at 9 p.m. from Golden State’s Oracle Arena. You can catch coverage of that matchup on ESPN Gainesville 95.3 FM starting at 8 p.m.