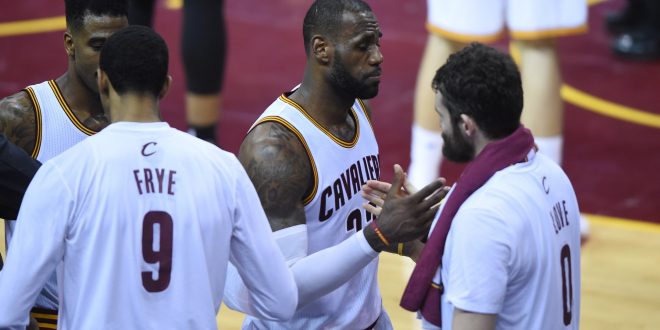 Cavaliers Have Turned the NBA Finals Around

Last week, it looked like the Cleveland Cavaliers were done. They were down 3-1 in the NBA Finals versus the Golden State Warriors, and each of their three losses was by at least 10 points. Since then, the Cavs have rebounded, winning Games 5 and 6 to force a decisive Game 7. And the Cavs have a chance to make history during Game 7; if they win, they will be the first team to win the NBA Championship after being down 3-1 during the Finals.

The Cavs’ turnaround has to be credited to LeBron James. James has scored 41 points in each of the last two games and leads the NBA Finals in points, assists, blocks and steals.

.@KingJames leads this #NBAFinals series in:

In the past two games, the Cavs have beaten the Warriors by double digits and held their field goal percentage to under 50 percent.

And it’s not just the Warriors’ play that is taking a hit; their emotions are starting to get the best of them. Thursday night, Stephen Curry fouled out, threw his mouthpiece into the crowd in frustration, and then was ejected. Golden State head coach Steve Kerr criticized the officiating following the game. Curry and Kerr were both fined $25,000 by the league for their actions.

Steph Curry (30 Pts) fouls out of Game 6 and is ejected for the 1st time in his career. pic.twitter.com/WyjKhPfUQH

The Warriors may be sputtering, but they do have the venue on their side for Game 7. Game 7 will be a home game for the Warriors in Oakland, where they have only lost two games through the playoffs.

However, James said he is not concerned by the environment.

Junior telecommunication student at the University of Florida. Passionate about all things related to sports.
@@EllenBazley
Previous Day one of the U.S Open: Delayed by Thunderstorms
Next Rays and Marlins Open Home Weekend Series