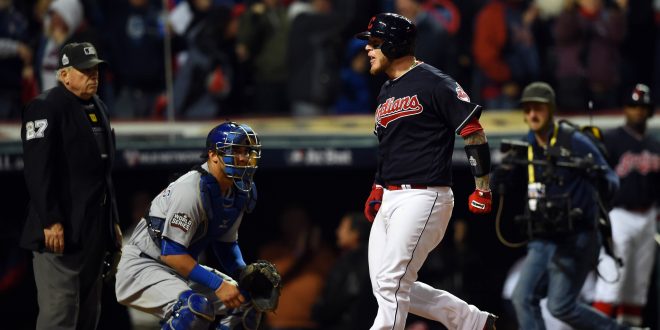 Either the Cleveland Indians, or Chicago Cubs, will be crowned the next reigning champion of the baseball world. On Tuesday night, the Indians were the first to put in their bid for the throne with a 6-0 shutout of the Cubs.

Miller fanned three batters in two innings of work. His role as a reliever could be the difference in this Series, and it’s something he’s dreamt of since making his entrance to the big leagues.

Something about this game seemed destined for an Indians win. One could argue Tuesday night was the greatest night in Cleveland sports history — to date. The stage was set. Cleveland sports fans celebrated a championship with the Cavaliers as they watched their Indians inch closer to a fall classic win.

Even Cleveland’s first two runs seemed …. odd. Both in the bottom of the first. The ball didn’t even leave infield. Jose Ramirez singled to score Francisco Lindor. Same inning, Brandon Guyer is hit by a pitch and advances to first, scoring Carlos Santana. Guyer was hit by 31 pitches in the 2016 season.

Who said the ball has to leave the infield? pic.twitter.com/J8lIYcoXfh

Roberto Perez would seal the deal for the Indians with two bombs — first in the fourth, then in the eighth to score Guyer and Lonnnie Chisenhall. Perez joined some great company with his performance on Tuesday night.

It’s evident the Cubs have their work cut out for them with the Tribe’s bullpen. Cubs manager Joe Maddon knows this.  On the flip side, Cleveland Manager Terry Francona must manage expectations inside and outside of the locker room. Francona owns a 9-0 record in World Series games.

The Indians and Cubs are back at again tonight 7 p.m. in Cleveland for Game 2.