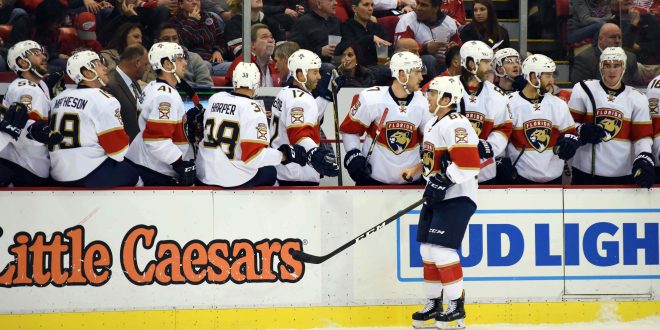 Panthers Get Set to Host Bruins

After ending a three-game losing streak with a 5-2 road victory Sunday against the Detroit Red Wings, the (4-4-1) Florida Panthers get set to host the Boston Bruins(4-4) Tuesday night.  Center Colton Sceviour led the charge for the Panthers with a Motor-City hat-trick.  The hat-trick was the first of his career.

Panthers Head Coach Gerrard Gallant spoke about taking advantage of scoring opportunities in the effort. In addition to Sceviour, the Panthers will look for center Jonathan Marchessault to continue his hot offensive play.  Marchessault leads The Panthers in goals(6), assists(5), and points(11).

The Boston Bruins come in also following a victory vs. the Red Wings, as Bruins goalie Tuuka Rask made his return after missing the past three games with body soreness.  Rask however showed no signs of rust, as he made 24 saves in a 1-0 shutout.

Bruins’ center Tim Schallers’ late second period goal proved to be the winner.  The Bruins have won all three games in which Rask has started.

The Panthers will look to flip last years season series script, as they lost three out of four games against the Bruins in 2015, including both games at home.