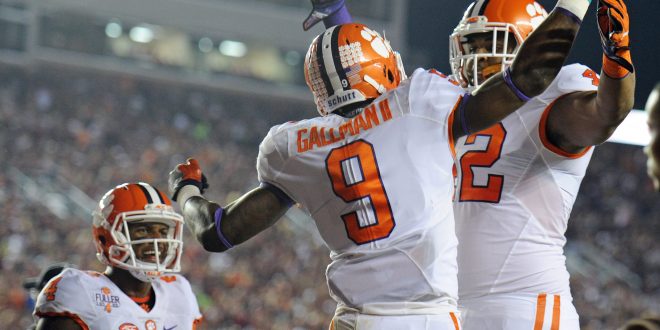 The No. 3 Clemson Tigers (8-0) defeated the previously No. 12 ranked Florida State Seminoles (5-3) by a score of 37-34 this past Saturday at Doak Campbell Stadium. It was a back and forth affair that saw four lead changes, including two in the last four minutes of the fourth quarter.

Both offenses went wild in this game as Clemson outgained Florida State 511 to 449 in total offensive yards. Junior quarterback Deshaun Watson lit it up as he completed 27 of 43 passes for 378 yards and two touchdowns while throwing two interceptions. On the ground, he ran 17 times for 52 yards.

On the other side of the quarterback duel, redshirt freshman Deondre Francois kept the Seminoles in it until the very end. He went 17 of 35 for 286 yards and a touchdown with one interception. His scrambling effectiveness did not mirror Watson’s as the Clemson defense sacked him six times.

Looking at the running back comparison, Florida State’s Dalvin Cook blew Clemson back Wayne Gallman out of the water. On 19 carries, Cook ran all over the Tigers’ defense for 169 yards and four touchdowns. His longest run was 70 yards.

Cook gave the Seminoles their first lead of the night in the third quarter along with what could have been the game-winner with 3:23 to go in the game.

With nearly an equal amount of carries, Gallman was contained for most of the game. Clemson’s redshirt junior ran for just 80 yards with his longest attempt being 12 yards. He made the most of his chances though, as he registered two touchdowns on the night.

Both receiving corps had a field day. Clemson’s Jordan Leggett led all receivers in yardage as he hauled in five receptions for 122 yards. His lone touchdown catch of the night was a big one as it gave Clemson a 37-34 lead with 2:06 to go in the game. Leggett, a tight end, showed some athleticism on the play as he dove into the end zone for the game winning score.

Among the rest of the Tiger wide receivers, junior Mike Williams had a game-high seven grabs for 70 yards along with a clutch two-point conversion reception after Leggett’s touchdown.

For the Seminoles, sophomore Nyqwan Murray, senior Kermit Whitfield, and junior Travis Rudolph were the go-to receivers. Murray led the team in all receiving categories as he nabbed six catches for 96 yards and a touchdown. He was the only Seminole wideout to find his way into the end zone.

Whitfield caught four passes for 70 yards and Rudolph had three receptions for 63 yards.

Defensively, both teams terrorized the opposing quarterback. As mentioned earlier, Francois was brought down six times while Watson was caught in the backfield on four occasions.

The culprits responsible for the sacks on Francois were Kendall Joseph (one), Ben Boulware (one), Clelin Ferrell (one), Austin Bryant (two), Chris Wilkins (0.5), and Dexter Lawrence (0.5). The previous two sacked Francois on third down and 20 to set up fourth down and 32 with 26 seconds left in the game.

From there, Ben Boulware took matters into his own hands as the senior linebacker sacked Francois to secure Clemson’s second straight win over the Seminoles. Boulware was the Tigers’ second leading tackler with six wrap ups. Kendall Joseph led all Tiger defenders as he accounted for seven tackles in the contest.

On the Florida State defense, Derrick Nnadi (one), Demarcus Christmas (one), Ro’Derrick Hoskins (one), and Brian Burns (one) were the sack machines. Nnadi was among the top three Seminole tacklers in the game as he recorded eight. Ahead of him was senior DeMarcus Walker with 10 and junior Trey Marshall with 11.

In the secondary, both units created turnovers. For Clemson, it was senior Jadar Johnson who picked off Francois with 4:45 to go in the first half. His interception would lead to a field goal that pushed the lead to 17-7.

For Florida State, both of the takeaways they had were momentum-shifting. First was Marquez White’s interception in the early moments of the second quarter. It prevented Clemson from going up 21-0 and set up a Seminole touchdown to trim the deficit to 14-7.

The Seminoles’ second interception came midway through the third quarter when Tarvarus McFadden picked off Deshaun Watson on second down. The very next play, Dalvin Cook would break a 23-yard run to give Florida State a 21-20 lead.

Clemson’s kicker Greg Huegel was huge this game as he nailed three field goals and two extra points. He hit from 23, 34, and 46 yards out, respectively. Florida State’s Ricky Aguayo never had an opportunity to kick a field goal, especially when the Seminoles were trailing 37-34 at the end of the game. However, the freshman did nail all four of his extra point attempts.

This loss gave Florida State their second home loss of the season and third overall. Head coach Jimbo Fisher was not happy in his postgame press conference.

Fisher’s heated remarks stemmed from a “chop block” call in the fourth quarter that negated a huge run from Dalvin Cook. The Seminoles would end up punting, and Clemson would take a 29-28 lead on the ensuing drive. As a result of Fisher’s postgame comments about the officiating, Florida State was fined $20,000.

For No. 3 Clemson, this was their first victory in Tallahassee since 2006. Tiger head coach Dabo Swinney, who seems to keep delivering big win after big win for Clemson’s football program, said it was a hard fought victory.

Swinney and company will look to stay undefeated as they head back home to take on the Syracuse Orange (4-4). Kickoff is set for 3:30 p.m. and it can be seen on ABC.

As for the now No. 19 ranked Florida State Seminoles, they will play another night game as they head to Raleigh to face the North Carolina Wolfpack (4-4). Game time is 7 p.m. and it can be seen on ESPNU. 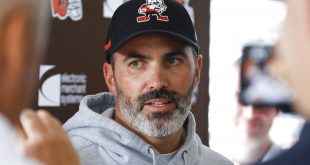 The Six-Game Suspension Star quarterback for the Cleveland Browns, Deshaun Watson, has just been sentenced …