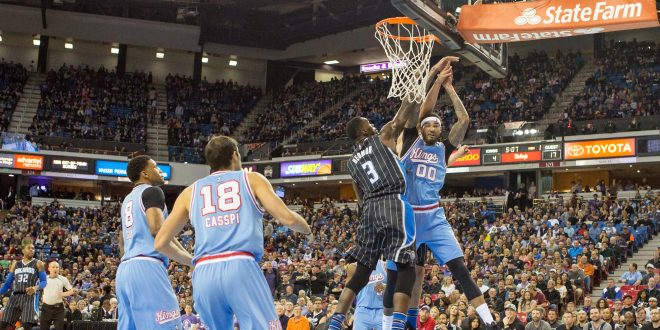 The Magic won their first game of the season on Tuesday when they defeated the Philadelphia 76ers 103-101.  The Sacramento Kings, on the other hand, have lost their last two games versus the Atlanta Hawks and the Miami Heat.

The Magic have started off slow this season. Orlando is struggling on both sides of the ball.  Offensively, the team has struggled to score points, averaging only 90 points a game, second worst in all the NBA. Defense hasn’t look much better for the Magic. Orlando is 17th overall in points allowed this season as teams are averaging 105 points per game against them.

Orlando’s off-season acquisitions of Serge Ibaka and Bismack Biyombo have yet to make the impact needed to get the Magic into the win column consistently.  Ibaka was brought in from Oklahoma City in hopes he could grow into into a cornerstone of the team after his years of being the third option behind Kevin Durant and Russell Westbrook.  So far in the early season this has not been the case as Ibaka is only averaging 14.5 points a game, very close to his career averaging even though he is more of a primary option offensively.

The Kings so far on the season have been a fairly balanced team.  They are 21st in scoring offense averaging 100.8 points per contest.  Defensively, the Kings are ranked 14th overall in points allowed. Teams have averaged 102 points per game.

The Kings are looking to improve on their poor 33-win season from a year ago.  This was their best season since the 2007-2008 season when they won 38 games.  In order to keep improving, the Kings will need to lean on their star big man DeMarcus Cousins.  Cousins has started the season on fire averaging 26.8 points a game and averaging nine rebounds a game.  The major knock on Cousins since he has entered the NBA is his inability to keep his emotions in check leading to foul trouble.  This issue reared its ugly head again in the Kings Nov.1 loss to the Miami Heat.  Cousins picked up six fouls against the Heat all in the 4th quarter. When Cousins exited the game the score was tied, the Kings would end up being outscored 17 to 5 after Cousins was disqualified.

The last several days across the U.S. have been nothing short of violent, disastrous. Cities …