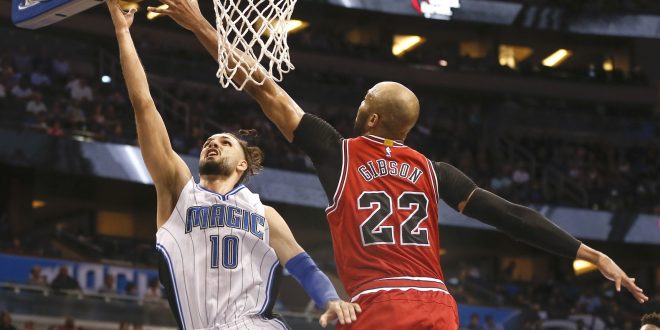 The Orlando Magic (19-25-2) face the Chicago Bulls (20-25) tonight at home in the Amway Center.  Tip-off is scheduled for 7 p.m.  The Magic were blown out in their previous matchup with the Bulls, losing 80-112 in Chicago on Nov. 7.  The Bulls held the Magic to 23 percent shooting and 28 points in the second half last time these two teams played.

The team has been stumbling as of late, going 1-4 in their last 5 contests.  Tonight’s game is the last of a three game home stand for the Magic before they head to Boston to kick off three road games.

First-year Orlando head coach Frank Vogel preaches discipline and displaying patience while on the court.  When asked about the team last week following an ugly road loss to the Houston Rockets, Magic center Nikola Vucevic told the Orlando Sentinel “We don’t play the right way…we can play as hard as we want, but as long as we keep playing like this, this is how it’s going to be. It’s hard for guys to keep telling guys to give effort when we don’t do the right things out there. We take bad shots, we play selfish. It’s embarrassing.”

Vogel is trying to keep the direction of the team in order as veterans like Vucevic call out the team on its lack of effort.  “Nobody is happy with how we played – I’m not, they’re not and we’ve got to work together to figure it out.”

At 17-25, the Orlando Magic have passed the half way mark of the season. What should they do?

The Orlando Magic have had the exact same preseason scouting report for a few years now:

“If one of their young guys make a leap this is a potential playoff team.”

“They have a lot of nice pieces, but I’m not exactly sure how they all fit together.”

“They should at least be competitive on a night to night basis.”

Every year there’s a hope that one of their high lottery picks in Victor Oladipo, Aaron Gordon, or Elfrid Payton will blossom into a star.  However, Oladipo is now in Oklahoma City after being traded for Serge Ibaka in the offseason.  Elfrid Payton continues to show an inability to stretch the floor.  Aaron Gordon has shown steady improvement but he has not shown an ability to take over the game on a nightly basis.  The Magic have a Shaquille O’neal sized hole in both their defense and offense.

Penny Inducted to the Hall

On a more positive note, the team inducted star point guard Penny Hardaway into the Orlando Magic Hall of Fame Friday. The Magic honored Hardaway during a special halftime presentation during Orlando’s game against the Milwaukee Bucks at Amway Center.  Hardaway joins elite company as he is just the team’s fifth member to join the Magic Hall of Fame.

Hardaway spent six seasons in Orlando where he averaged 19 points, 6.3 assists, 4.7 rebounds and 1.95 steals per game. Penny Hardaway and center Shaquille O’Neal guided the Magic to the NBA Finals in 1995 where they lost to the Houston Rockets.  Hardaway remains third on the team’s all-time steals list (718) and fourth in assists (2,343).

Behind-the-scenes… as @Iam1Cent is inducted into the @OrlandoMagic Hall of Fame! pic.twitter.com/4LVyFnGWuV

For coverage of tonight’s game, tune to FOX Sports Florida at 6:30 p.m.

After the Bulls game, the Magic travel to Boston to take on the Celtics at the TD Garden Friday night.  The Magic lost to the Celtics 87-117 in Orlando earlier this season.