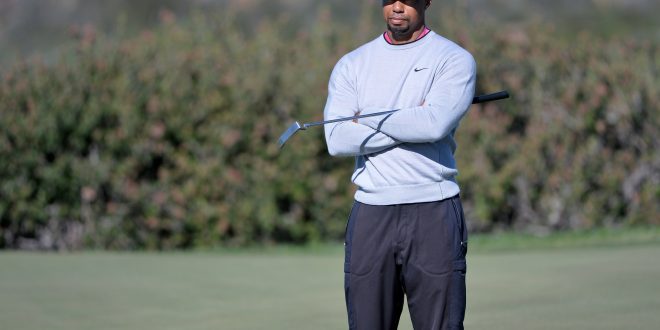 Tiger Woods’ downward spiral in the golf world has hit an all time low. The 106-time winner hasn’t won a Major since 2008, and has now resorted to withdrawal. ESPN reports that Woods withdrew from the Dubai Desert Classic this morning before beginning second-round play. Though nerve issues resulting in three surgeries have affected the golfer’s performance since 2014, Woods and his manager are insisting that it was “back spasms” that forced Woods out of the tournament. However, this is the seventh time that an injury has forced Tiger Woods out of a tournament since 2010.

Woods shot a 5-over-par 77 in the first round of the Dubai Desert Classic. Though it seemed like his back was hurting during the first round, Woods simply chalked his poor performance up to “not doing a very good job.” But, after a lower back spasm later that night, Woods’ manager said that he waited three hours before officially withdrawing. This is the third in a string of failed tournaments following Woods’ year-long break from golf. In December, at the Hero World Challenge, he placed 15th out of 18. Last week, he missed the cut at the Farmer’s Insurance Open. This isn’t baseball, but could this be strike three for Tiger?  Some are even calling for Woods to retire.

@TigerWoods trying to set another record. . matching the amount of withdrawals to wins in his PGA career

Hey @TigerWoods, you're kinda going through what Kobe did. Time to hang up the bag my friend.

Has Tiger Lost His Roar For Good?

Tiger Woods was one of, if not the, best golfers of all time. In PGA Tour Wins, he sits second at 79, only three wins behind Sam Snead. But, Woods’ winning span was a little over than half of Snead’s. He sits third in European Tour wins as well. But now the 41 year old Woods is much older than his strongest competitors. For example, American golf darling Jordan Speith is 27 and top ranked golfer, Australian Jason Day, is 29. And on top of the back spasms and nerve issues, some experts believe that Woods’ 2009 mass cheating scandal humbled the champion and dampened his deservedly entitled mentality for good. Woods has not won a Major since 2008 and has only won three tournaments since the scandal.

Woods plans to compete at the Genesis Open on February 16th and then again at the Honda Classic the following week, but this recent injury and withdrawal casts some real doubt as to what the future of Tiger Woods will be.