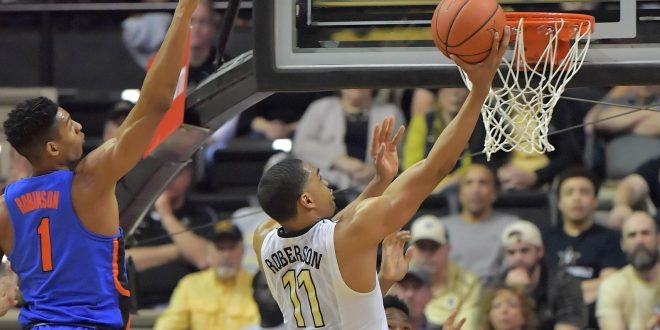 For the third time this season, the Gators and the Commodores will square off. This time, it’s in the SEC Tournament with postseason implications on the line. Per Joe Lunardi’s latest Bracketology on Thursday afternoon, Vanderbilt is an 11-seed, and has one of the last four byes in the field. Florida is a 4-seed, still slotted with the same match-up with now SoCon champion ETSU in Orlando. The game between the two squads is in Nashville this time, but at Bridgestone Arena in a “neutral” location. The contest tips-off at 7 p.m. on the SEC Network.

What’s On The Line?

If the Gators win, the victory will all but solidify their spot as a 4-seed in the NCAA Tournament, with a slight chance to move up to a 3-seed. That would happen only if they ended the tournament with a victory over the Kentucky Wildcats. If Florida loses, they will more than likely still be a 4-seed with a game in Orlando, but would at worst fall to a 5-seed. That scenario is still unlikely unless the committee were to fall in love with a team like SMU, Cincinnati, Virginia or Notre Dame.

If the Commodores win, the squad’s third win over the 17th-ranked team in the nation would guarantee Vandy a ticket to the big dance. If Vanderbilt loses, they will still probably be in the NCAA Tournament with wins over Florida (x2), Iowa State, Arkansas and South Carolina, but could have to compete in a play-in game if a team like Xavier, Kansas State or URI caught fire in their respective conference tournament.

It is also important to note that Florida is 0-4 vs. Vanderbilt in the past two seasons. The Gators last win vs. the Commodores came on February 18, 2015, when Billy Donovan was still running the program. Vandy is the only SEC team that Mike White still hasn’t beaten.

What Is Vanderbilt’s X-Factor vs. Florida?

Aside from being the best team in the SEC from beyond the arc, shooting 38% from three-point range, Vanderbilt has capitalized on the Gators’ inability to produce offense in stretches in the second half. In the team’s two meetings this season, the Commodores have outscored the Gators, 83-65, in the second half, and 21-15, in the final four minutes combined of each of the games. It seems at the end of these past two match-ups, Florida’s offense vs. Vanderbilt has been playing not to lose, instead of keying in on defensive opportunities leading to offensive buckets.

If you exclusively watched the final twenty minutes of this game, you would’ve thought the ‘Dores were the Golden State Warriors. Vandy shot 8-14 from beyond the arc in the second half as Joe Toye and Riley LaChance, one of the nation’s premiere three-point threats, were a combined 6-8 from beyond the arc.

Throughout the entirety of the game, Vanderbilt played tight as a unit, turning the ball over only six times, while Texas A&M had 14 giveaways leading to 14 points for Vandy. 50% of the Commodores scoring came from three-point range, like it usually does, as Vanderbilt cruised to an easy 66-41 win over the Aggies.

All Florida players, barring John Egbunu, per usual, are a go for Friday night’s game. Canyon Barry is essentially at 100% at this point after suffering a second sprained ankle a couple of weeks ago. Gorjok Gak is also fully healthy at this point.

Vanderbilt has no players listed on their injury report either.

Previous Santa Fe Women’s Hoops Advances to Second Round of State Tournament
Next Vanderbilt Takes Down Florida For The Third Time This Season, 72-62, Ending Their SEC Tournament Early