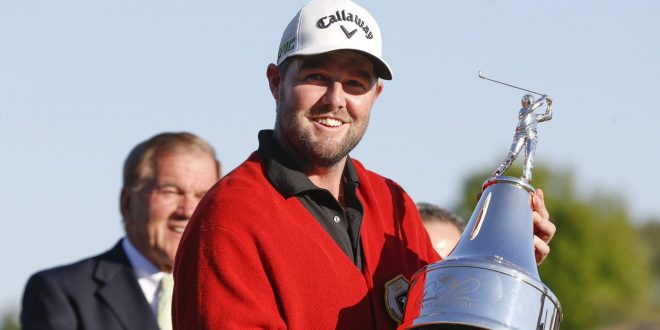 The PGA TOUR was in Orlando for the Arnold Palmer Invitational this weekend.  The biggest story line of the week wasn’t who was there, but rather who could not be.  Tournament host and PGA legend, Arnold Palmer, passed away in September at the age of 86.  Every year he would shake the winner’s hand as he walked off the 18th green on Sunday, but sadly not this year.

In a come-from-behind win, Australian Marc Leishman got his second tour title, the first since the 2012 Travelers Championship.  His 51 ft. eagle on 16 and clutch par save on 18 helped him clinch the win.  Another first for the tournament was the red cardigan, in honor of Palmer, that will now be awarded to the winner.  With the API win, Leishman earned an invitation to this year’s Masters Tournament.

From Rookie to Seasoned Pro

The Australian earned rookie of the year honors on the PGA TOUR in 2009.  That season he finished a career-high 20th in the FedEx Cup standings, and earned his first win in 2012.  In the time before the last win and this one, personal struggles off the course took precedence and a toll on his golf game.  Leishman’s wife, Audrey, nearly died in 2015 when she came down with toxic shock syndrome.  Doctors gave her a 5% chance of survival, and Leishman withdrew from the Masters that year to be with his wife, who miraculously survived.

Leishman has only missed one cut this season in his nine starts during this wrap-around season.  He is a familiar name on the leader boards with his consistent play.  He started Sunday’s round T-3, three shots back of leaders Charlie Hoffman and Kevin Kisner.  Leishman’s 51-foot eagle putt on the par-5 16th propelled him to -11 and in the lead.  His nerves had to hold up on 18 when he had a 3-footer to stay at 11 and take the lead in the clubhouse.  Both Kisner and Hoffman struggled on the day, finishing T-2 at -10 after both shoot rounds of +1.

Click here to listen to what Leishman had to say about this year’s tournament without the King.

Leishman and the Tour will head to Longhorn country for the WCG-Dell Match Play event in Austin, Texas.  The top 64 golfers in the world received an invitation for the tour’s only regular-season match play event.  First round begins Wednesday and the winner will be decided on Sunday.