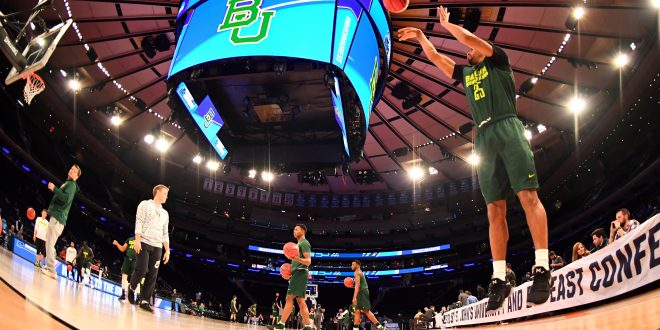 Baylor is the Favorite to Win against South Carolina

On Sunday, the Baylor Bears defeated the Southern California Trojans (82-78) to advance to the Sweet 16 round of the NCAA Tournament for the fourth time since 2010.  Manu Lecomte closed out the game against the Trojans in the last five minutes of the second half when the score was tied 65-65. Lecomte rallied an 8-2 run which locked in their victory with the final score of 73-67.

Now, the Bears are hopeful as they prepare to play against the South Carolina Gamecocks. In previous years, Baylor was matched with higher-seeded teams. Despite South Carolina’s upset victory over Duke, Baylor is the favorite to win tonight.

But, the Bears are not taking any chances.

In an article on USA Today, the Bears have watched three hours of footage on soley Sindarius Thornwell.

“You’re not going to stop a guy like that,” Baylor coach Scott Drew said. “What you do is you just try to make everything as difficult as possible — and hope that he doesn’t have 44 points” (USA Today).

While Thornwell is by far the biggest threat for the Bears, if Baylor plays this game like they have in this entire tournament, they will be able earn their way to the Elite Eight.

South Carolina is probably the most surprising participant in the Sweet 16. After truly a great upset victory against Duke (88-81), the Gamecocks are in New York City to fight for a spot in the Elite Eight.

Here is a video tweet from the South Carolina Men’s Basketball Team:

It's (our) time. #Sweet16 pic.twitter.com/imCEXYN9Jx

The SEC Player of the year First Team, Sundarius Thornwell, is definitely the key player for South Carolina. Averaging 21.4 points per game, the senior guard has come in clutch for the Gamecocks especially in the last game against Duke. Now, it is crunch time for him and his team as they are underdogs again in this matchup.

While both teams have set the bar high for their respective basketball programs this season, the Bears have had an incredible and dominating season. In January, Baylor was ranked No. 1 after winning their first 15 games of the season. And while they have had a pretty easy-go in the NCCA Tournament (playing the 14th and 11th seed), they still have won important games this season including victories over West Virginia, Oregon, and Xavier. Baylor has proven they have the ability to win important games and play great ball.

Now South Carolina has proven to surpass the odds. As a primarily defensive team, the Gamecocks have proven that their they play great offense. In their last game, their offense landed them a spot in the Sweet 16. If they play smart defense and have a great offensive game, they have the ability to upset the Bears.

Baylor and South Carolina will be playing tonight in New York City at 7:30 p.m. on TBS.

@sophialafrance
Previous What’s Next for the Gator Seniors?
Next NCAA Tournament Preview: Wildcats Take on Bruins in Sweet 16