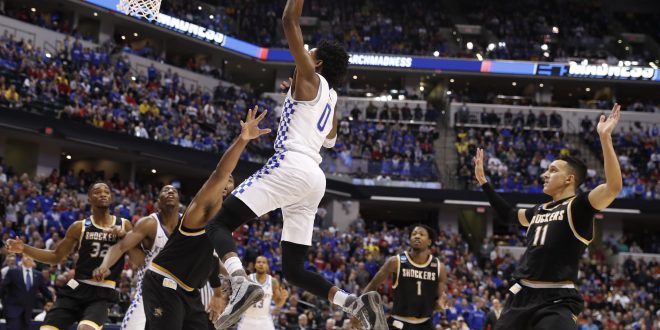 The No.2 seed Kentucky Wildcats(31-5) take on the No.3 seed UCLA Bruins (31-4)  in the Sweet 16 South Regional semifinal for the NCAA Tournament at FedExForum in Memphis, Tennessee Friday night. Not only is this the premier game for the Sweet 16, it is the only matchup that puts two teams separated by one line in the bracket together, but these two teams are the biggest blue bloods in the sport. These are both tradition-rich programs that have combined for 19 national titles. UCLA has won 11, Kentucky eight, and no other school has won more than five.

For Kentucky, this is a chance for a payback against UCLA in the Sweet 16 as the Wildcats fell to the Bruins in the regular season in Lexington. Overall UCLA has the most national titles, while Kentucky has the most wins all- time and his showdown, for that reason, is bound to be historic.

Kentucky coach John Calipari has had more success in the NCAA Tournament than Steve Alford. Calipari led Kentucky to a national title in 2012, but Alford has the Bruins in the Sweet 16 for the third time in his four seasons at UCLA. Kentucky has won 13 straight games. That’s by far the longest winning streak of any team left in the NCAA Tournament. The second-seeded Wildcats are in the Sweet 16 for the sixth time under John Calipari.

So far in the tournament, the Wildcats beat Northern Kentucky 79-70 in the first round, then Wichita State last Sunday afternoon in Indianapolis, getting out with a 65- 62 win.

UK has not only had an elite defensive team all season, but it looks to be an elite team on both ends of the floor against a top 10 team.  The Wildcats will beat the Bruins if they play defense as consistently as they did this past Sunday. The challenge for Kentucky becomes playing shutdown defense at a faster rate. The Cats have held opponents to 30.5 percent 3-point shooting this season, making them one of the best 3-point defenses in the country.

Playing our best basketball at the right time of the year. #Sweet16 pic.twitter.com/ncQMLlDwWH

The UCLA Basketball team has proven this season that they can run with any team at any time and be successful.  When it comes to the No.3 seed UCLA, averaging a tournament-best 90.2 points per game. UCLA is a top- three team in 2-point percentage and has had a great year.

It's GAMEDAY in Memphis!

The Bruins take on Kentucky in a Sweet 16 showdown at @FedExForum this evening.#GoBruins | #Sweet16 pic.twitter.com/TQjRysZyBV

On Saturday, December 3 UCLA waltzed into the Rupp Arena in Lexington and defeated the then No. 1 ranked Kentucky Wildcats, 97- 92. This snapped Kentucky’s 42 game home winning streak. It was also the most points any team put on a John Calipari-coached UK team.

The Bruins can beat UK Friday. UCLA will need to limit turnovers. That is how they beat the Cats earlier this season. Even with the win, the Bruins still coughed up the ball 18 times during that game. Head Coach Steve Alford says, “That’s unheard of, playing as fast as we want to play.” If point guard Lonzo Ball continues to play his best, it will help the Bruins beat the Wildcats again for an even bigger glory. In the first two rounds, Ball has made 13-of-17 shots (76.5%), averaging 16.5 points, 6.0 assists, 5.5 rebounds and only 1.0 turnover per game.

This game is not just being played for bragging rights. It is a chance for another National Championship.

Hello my name is Kaitlin Alexander, a passionate story teller and lover of sports. Fun facts about me: I am a world traveler, interviewed all three UF Heisman Trophy winners, and a former intern of Bleacher Report. Follow me on Twitter: KalexanderUF
@KalexanderUF
Previous Baylor is the Favorite to Win against South Carolina
Next Game Preview: North Carolina Tar Heels vs. Butler Bulldogs