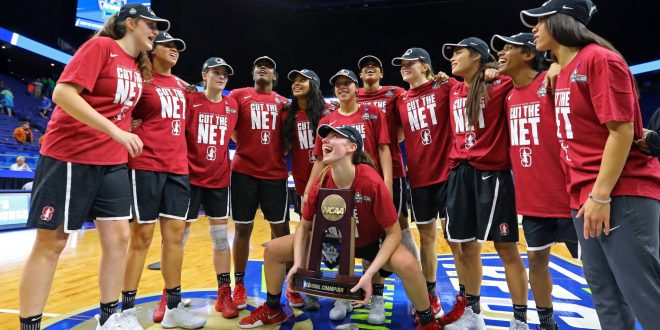 Stanford’s Road to the Final Four

In the last seconds of the game, both Stanford and Notre Dame’s fans were holding their breath in suspense of who would punch their ticket to the Final Four. With Stanford only scoring 7 points against Notre Dame’s 23 in the 2nd quarter, this granted Notre Dame a 45-31 lead going into the half. In the second half, Stanford managed to make their way back into the game scoring 24 points in the 3rd quarter, as opposed to Notre Dame’s 12. In the fourth, with Notre Dame down 74-73, Lindsay Allen connected to take the lead 75-74. With only :40 seconds left in the game, Stanford brought the ball down the court where Alanna Smith made a layup, assisted by Marta Sniezek, to seal the win for Stanford 76-75 in thrilling fashion.

What Has Led to this Point

Stanford came into the Women’s NCAA Tournament as the Pac-12 Champions. They clinched that title after defeating the Oregon St. Beavers 48-43 in the final game of the Pac-12 Tournament.

Stanford, who was 29-5 on the season and seeded number 2 in the Women’s NCAA Tournament, almost didn’t survive the first round of play. After trailing 38-31 at the half to 15 seed New Mexico St. Sanford then came back to make the game 49-48 at the end of the third. They then went on to score 24 points in the fourth, the most by either team in any quarter, to bring home the 72-64 win.

In the Round of 32 Stanford easily defeated the 7th seeded Kansas St. Wildcats 69-48. They then went on to beat the Texas Longhorns 77-66. This led them to the eventual comeback win at Notre Dame that punched their ticket to the final four.

@StanfordWBB What a game!!!
What a Comeback!!!

Brittany McPhee has definitely been a star in the tournament. She scored 16 points in the first game against New Mexico St; a team high of 21 points and five 3-pointers against Kansas; and a whopping 27 point against Notre Dame.

Alanna Smith has also been playing great in the tournament, scoring 19 points with 11 rebounds in the win against New Mexico St. She kept the ball rolling in the Kansas State game as she scored another 19 points. Smith then scored 15 points against Notre Dame, shooting 7 for 10 on field goals.

After making five 3-pointers in the win over New Mexico St. Karlie Samuelson started off hot. In the matchup against Kansas St. she struggled, only making 2-3 field goals. She got back on track however, making 5-11 field goals and 4-8 3 point shots in the win over Texas.

Erica McMall was a difference-maker in the matchup against the Texas Longhorns. She was the only player on the court to score more than 20 points, scoring 23 points. McMall came in clutch in the final seconds of the Notre Dame game, blocking a shot at the buzzer.

Erica McCall with the biggest block of the season! @StanfordWBB comes back from 16 down for a #WFinalFour trip to Dallas! pic.twitter.com/7KqIrPamID

Stanford is now awaiting their Final Four matchup against the winner of Florida State vs South Carolina. Tip-off is tonight at 9. The Final Four game will be played on Friday March 31st.