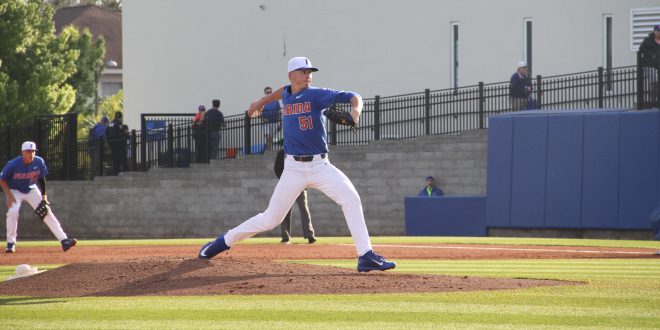 For the second straight day, the Gator baseball team went to extra innings with Tennessee.

And for the second straight time, the Gators lost a one-run game to the Vols in 10 innings.

Florida fell 3-2 to Tennessee on Saturday night at McKethan Stadium, one night after losing to them 7-6.

The win clinches Tennessee’s first series win in Gainesville since 2007. The Volunteers improve to 17-11 and 3-8 in the SEC.

The Gators meanwhile, despite their 20-12 overall record, now have a losing record in SEC play, as they’re 5-6 through 11 conference games. The loss also means Florida dropped a home series for the first time this season.

The Gators played the game without preseason All-Americans Jonathan India, Deacon Liput, and J.J. Schwarz for what head coach Kevin O’Sullivan called after the game a violation of “team rules.” He said all three will return to the lineup for Sunday’s match up.

Michael Byrne (1-4) took the loss while Jon Lipinski (3-0) earned the win, both in relief roles.

Another strong performance from Gator starting pitcher and sophomore Brady Singer resulted in a no decision. Singer went 7.1 innings and struck out eight batters while only allowing six hits and two earned runs.

Garrett Stallings, the freshman starter on the mound for Tennessee, also pitched strong, allowing 10 hits but only two earned runs in 6.1 innings of work.

Without three of their best hitters, the Gators ironically had one of their higher hit totals on the season, putting up 11 hits. That, however, only translated into two runs, due mostly to stranded base runners and some poor base running decisions.

That was on display in the second inning, where Florida had a chance to take the lead. The Gators got three straight one-out singles to load the bases, started by Ryan Larson. Larson’s bat has been on fire in the series. He went 3-for-5 in the game, and is batting .700 in the series (7-for-10). He was on third with a chance to score, but Garrett Milchin, playing at first base in place of the benched Schwarz, grounded out into an inning ending double play.  However, Larson did not advance to third on a hit and run single when he was on first base and as the inning unfolded it cost the Gators a run.

Tennessee drew first blood in the following inning. With runners on first and second, left fielder Justin Ammons took the first pitch he saw from Singer and singled it into left field. Reggie Southall scored from second base to put the Vols on top 1-0. Singer got the next two batters out to avoid any more damage.

Florida answered in the fourth inning, providing all of their scoring output in the bottom of half of that inning.

With one out, again it was Larson who started the rally, with a single to left field. After moving to second on a passed ball, he scored on an RBI, stand-up triple from Mark Kolozsvary into the right-center field gap. Kolozvary also had a solid day in the middle of the line-up, going 3-for-4 with an RBI and a run scored. Kolozvary scored on an RBI hit from Milchin, making up for his double-play ground out two innings before.

Four innings complete and the #Gators took the LEAD!

We lead 2-1 as Brady heads back to the mound. #SingerSaturday

The Gators had a chance to increase their lead in the fifth inning, but a base-running mistake from Blake Reese resulted in him being caught in a run down as he tried to get to home after a bloop single from Mike Rivera. O’Sullivan said after the game the Gators made too many mistakes on the base paths, and it cost them runs in the game.

Tennessee Ties It Up

Tennessee made the Gators pay for their inability to pull away by tying the game up in the sixth inning. First baseman Andre Lipcius, facing a full count, rifled a pitch down the right field line, the ball landing fair by less than a foot and it resulted in an RBI triple for the Volunteers with catcher Benito Santiago scoring to make it 2-2.

Florida had a chance to end the game in nine innings, with another bases loaded opportunity.  It seemed like they had their guy at the plate too, as Larson stepped up with two outs and Reese, Rivera, and Maldonado on base after the latter two forced full-count walks. Instead of becoming a hero on the night, Larson failed to get a hit for one of the few times in the series, and to the 10th inning the teams went.

Extra innings (again) for the #Gators and #Vols pic.twitter.com/V8LA4YvWw8

And for the second straight night, the Vols delivered in the first half inning of free baseball.

With Ammons on second base, Santiago doubled to left field. Larson’s throw to Guthrie, the cut-off man, was on target, but Guthrie dropped the throw. That small mistake made his throw to home just a little late, as Ammons beat the throw and gave Tennessee the one run lead.

In the bottom of the 10th, Lipinski took the Gators down 1-2-3, and gave Tennessee its second win in Gainesville in as many nights. After having only one win through nine conference games, the Vols have gotten twice that amount in their two nights at McKethan Stadium.

Florida meanwhile seems to continue to put themselves in close games. After playing in 17 games decided by one run all of last season, they’ve already played in 16 of those so far this year, with a 10-6 record in those games. Also concerning, the Gators are just 1-3 in games that have gone to extra-innings this season.

O’Sullivan said that while it’s frustrating that the Gators are below .500 in league play now, there’s “still a lot of baseball left” and they’ll be back Sunday ready to play.

The Gators will look to avoid the home sweep, as they send Jackson Kowar (4-0) to the mound. First pitch is at 1 p.m.