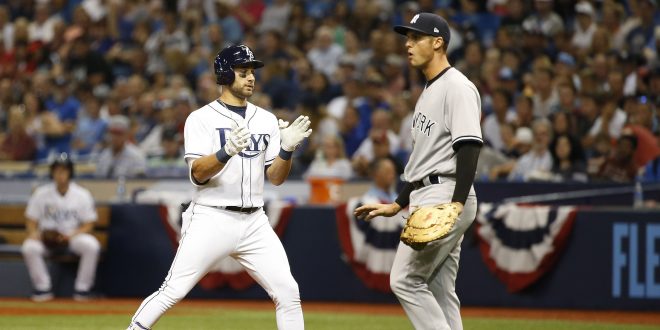 After dropping one game to Toronto on Thursday, the Tampa Bay Rays have now won three straight games to improve to 5-2, the best seven game start in franchise history.

Meanwhile, the season hasn’t gotten off to a hot start for the reigning AL runner-up. The Blue Jays have dropped five of their first six games and Sunday didn’t do much of anything to boost morale.

Star third baseman Josh Donaldson left the game in the sixth inning with an apparent leg injury but he should be good to go for the team’s home opener tomorrow.

Things got a little interesting in the second inning after a hard slide from Steven Souza Jr. on a close double play.

Troy Tulowitzki expressed his dissatisfaction with Souza’s slide, benches cleared and Jose Bautista did not get punched.

Things settled down fairly quickly and the teams went back to their dugout.

As for Souza, the right fielder claimed that he was just playing hard and that he was not trying to hurt the shortstop.

The Rays have their bats to thank for the hot start, hitting .271 collectively. To go along with a stellar batting average, the Rays have also scored 33 runs and hit seven homers, including three on Sunday.

Perhaps the hottest bat on the Rays is Steven Souza Jr.

Souza is hitting .417 on the season and will look to improve that stat on Monday when the Rays head up to New York to take on the Yankees.

But it doesn’t end there.

Michael Pineda is on the mound for the Yankees. Souza hit .476 in 21 at bats against Pineda last season.

Souza won’t be the only member of the Rays that will be happy to see Pineda on the hill. In his only start on the season, the Rays blasted Pineda for four runs and eight hits in just 3 2/3 innings.

The Rays will be in New York for their next three games.

Alex Cobb will be on the mound for the Rays on Monday. Cobb got a win in his only start this season, which happened to be against Michael Pineda and the Yankees last Wednesday.

Cobb allowed one run on four hits in 5 2/3 innings pitched on Wednesday, and is 6-2 in 13 career starts for against the Yankees.

Previous Sergio Garcia, Finally a Master’s Champion
Next The Miami Marlins Start Their Season with a 3-3 record