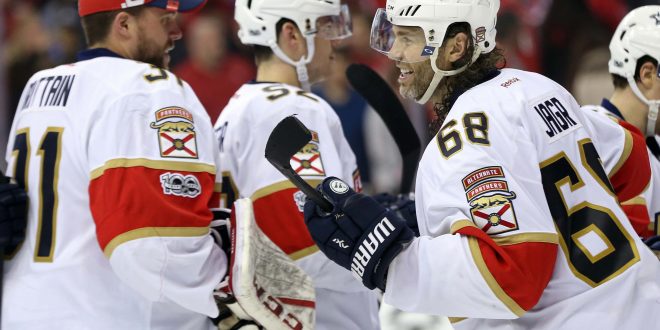 A year after surprising the hockey world by making the playoffs, the Florida Panthers failed to meet those standards and find themselves out of the playoffs.

When Gerard Gallant became the head coach of the Panthers, he led them to 91 points in his first season. The season after that, he helped the Panthers build off their momentum with 47 wins, 103 points and an Atlantic Division title. The next season, this year, the Panthers could not build off of their success and it ultimately cost Gallant his job. The Panthers finished the season seventh in the Atlantic with 81 points. Hockey analyst Barry Melrose called the Panthers’ season a disaster.

As the team’s general manager, one of Tallon’s roles will be to find a head coach. Interim head coach Tom Rowe will not maintain his role as the coach but will return as a special adviser to Tallon. Some coaches that Tallon could possibly look at are former Dallas Stars head coach Lindy Ruff, former Islanders head coach Jack Capuano and University of Denver head coach Jim Montgomery, according to the Miami Herald.  Other possibilities for the Panthers include former Kings coach Darryl Sutter and former Blues coach Ken Hitchcock.

"We're going to turn this around quickly."

The talent is still there

If there’s one thing the Panthers can count on, it’s that they still have the pieces built for success. Aaron Ekblad is already one of the league’s better defencemen at age 21. Although his play dipped this past season, his leadership skills are still a vital asset for the Panthers and will continue to be as team looks to become successful again.

Center Vincent Trocheck led the team in scoring with 54 points. He has increased his scoring every year with the team. Jonathan Marchessault burst onto the scene with his first 30-goal season, giving Florida the scoring touch that it needs. The Panthers also seem to be set at the goalie position. James Reimer, whom the Panthers acquired last season, had a solid season for the team with an 18-16-5 record, a 2.53 GAA and a .920 SV%. He finished his season strong by ending it with two straight shutouts. Jaromir Jagr, meanwhile, is still playing solid hockey at the age of 45. He finished this season with 16 goals and 30 assists and was tied for the team lead in power play goals with 8.

"They're good players, they work hard off the ice, they want to win." – Vanek on the team's young core. pic.twitter.com/Y55yP2vNBd

While the Panthers have the pieces in place to be successful, it certainly will not be easy for them. The Atlantic division is loaded with talented teams. The Montreal Canadiens won the Atlantic Division and show no signs of slowing down as long as Price remains in net. The Toronto Maple Leafs’ outlook is looking very bright after making the playoffs with a rookie laden squad. Although the Tampa Bay Lightning missed the playoffs, they’re still a dangerous squad as long as they have their core players (Stamkos, Hedman, Kucherov) in place and they can avoid the injury bug.

For now, Panthers fans will have to sit back and wait to see what the future of their team holds.

Previous Fight For The No. 1 Seed In The East Continues To Game 82
Next A Whirlwind of Emotions for the Chicago Cubs