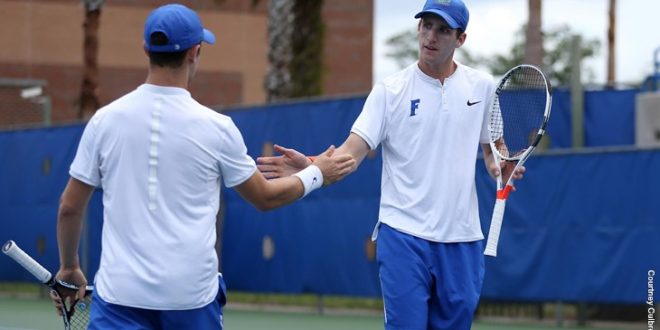 The Gator Men’s Tennis team has earned a No. 3 seed for the SEC Tournament. With two wins from this weekend, including a sweep of Auburn 7-0 on Sunday, the Gators finished their regular season with a 9-3 SEC record, which is third-best in the conference.

One of the biggest highlights was Elliott Orkin’s battle against Conner Huertas in the longest and last game of the match. Orkin won the first set 6-2, but Huertas didn’t give up the sweep very easily. The second set ended in a tiebreaker, but Orkin finished on top with the final score of 7-0. This win made it Orkin’s 100th career overall singles win. This record is the eighth all-time in UF’s history. The senior is leaving his mark in the record books with, 179 career combined wins, which is seventh in program history.

Thank you, Elliott, for the heart and leadership you've brought to this team every single day for the last four years #GatorsAlways pic.twitter.com/G7xZ47f85f

The Gators will have a week off from competitions to focus on the SEC Tournament. The team will then travel to Knoxville, Tennessee on April 26-29. The Gators will face off against the winner of the Ole Miss/ Auburn game on Friday, April 28.