Home / Basketball / Playoff Preview: Game 4 Between the Cavs and Celtics 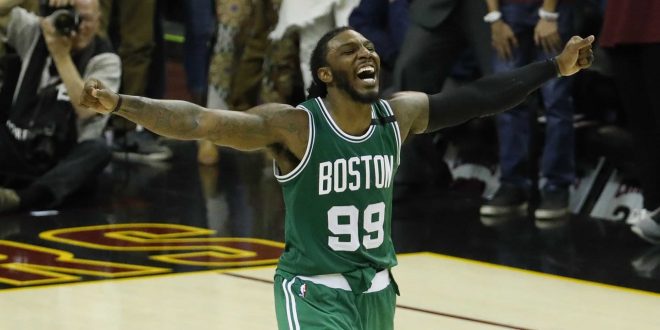 Playoff Preview: Game 4 Between the Cavs and Celtics

The Cleveland Cavaliers play the Boston Celtics in Game 4 of the Eastern Conference Finals in Cleveland at 8:30 tonight. The series is now at 2-1 after Boston’s stunning win on Sunday in Game 3.

The injury report will include Deron Williams of the Cavs after he missed morning shoot around due to an illness and Amir Johnson of the Celtics due to a shoulder injury. Both Williams and Johnson of which are expected to play tonight.

Isiah Thomas, however, will remain out for the rest of the playoffs after re-aggravating a right hip injury during Friday’s Game 2 loss to the to the Cavaliers. The injury first appeared during the Celtics’ series against the Wizards, but Thomas did not miss any games in that series. Thomas’s injury did not seem to hinder the Celtics in Game 3 though as they were able to beat the Cavs on a last second three-pointer by Avery Bradley.

Even without their star point guard, the Celtics were able to create their own shots and play good defense against LeBron James and the Cavs down the stretch.

Many were shocked as the Cavaliers blew a 21 point lead in the third quarter after making 14 3-pointers in the first half. Kevin Love played a major role in Cleveland’s quick start as he made five 3-pointers in the first quarter. Marcus Smart, however, was able to carry the load during late-game comeback as he shot 7-10 from beyond the arc and scored 27 points total.

LeBron James did not look like his usual self as he posted only 11 points on 4-13 shooting and six turnovers with stout defense from Jae Crowder and Marcus Smart. The Cavs as a whole gave up 15 turnovers and the Celtics were able to take advantage creating points off of the fast-break. The Cavaliers hope to bounce back by coming out of the gate much more aggressive than last game and to beat the Celtics early. They have now dropped to 10-1 in the playoffs with their first loss since Game 4 of last year’s Finals.

The Celtics will look to even the series tonight against the Cavs and it all starts with limiting LeBron James. pic.twitter.com/OI7ccLvFzn

The Celtics will try to build off of this momentum from Game 3’s win and go into the Quicken Loans Arena to tie up the series. They will look to do so by creating more turnovers and fast break defense, something the Cavs seemed to struggle at in Game 3.

Avery Bradley talked about focusing on what they can control.