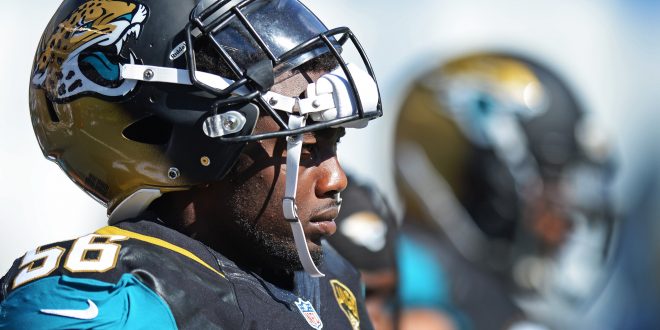 The arrest occurred last night after Fowler allegedly hit a man in a parking lot for criticizing his driving. After the verbal altercation began he stopped and exited his car, hit the man, knocking off his glasses, and then proceeding to step on them. Fowler also took the man’s grocery bag and threw it in a nearby lake. He was released on bond at 1 a.m. Wednesday morning.

The expectations for Fowler’s career following the 2015 NFL draft couldn’t have been higher. The former Florida defensive end was selected third overall, and the first defensive player taken in his class. He was the captain of the Gators in his final season and was selected to first team All-SEC. He was expected to be an NFL superstar. His combination of speed, size, and the game-tape to back it up, made pundits believe he was a lock at the top of the draft. Things haven’t played out so smoothly since he walked across the stage in Chicago two years ago.

His rookie season with the Jags ended before it began. Tearing his ACL on the first day of rookie mini camp. He spent what should’ve been his rookie season recovering from the injury and preparing for action in 2016.

His return in 2016 was underwhelming. Notching only 32 tackles and 4 sacks over the course of his “rookie” season. The future of Fowler’s career has never been murkier. It is difficult to predict how Roger Goodell and the NFL will handle this case, or whether he will face possible suspension. The Jacksonville Jaguars have released a statement acknowledging the arrest, but refusing to comment at this time.

Previous MLB Preview: Miami Marlins Take on Philadelphia Phillies
Next McElwain looking for the best of the best from Friday Night Lights