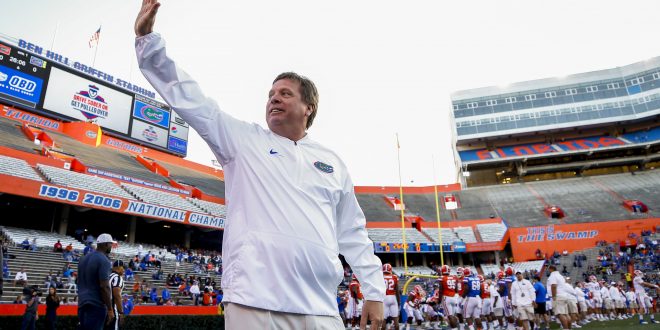 The recruiting momentum gained from Friday Night Lights shows no signs of slowing down for Jim McElwain and the Gator football program.

Florida landed its ninth commit in the past week Monday night in the form of 2018 three-star wide receiver Tyquan Thornton . Thornton is the 14th ranked receiver and 109th overall ranked player in the State of Florida.

Thornton hails from Miami area powerhouse Booker T. Washington. Florida was battling Miami for the receiver’s commitment after the receiver de-committed from Baylor on June 7. The commitment follows a recent trend of South Florida players committing to Florida as the Gators have made more of a concerted effort to really target the area the past couple of years.

The 6’3″ 165-pound wide-out has been rising up recruiting boards because of his athleticism. He’s been showing out at camps over the summer, showing off his route running, size and speed.

Booker T. takes the lead off of a Tyquan Thornton touchdown and extra point. They lead 21-20 entering halftime pic.twitter.com/pQ9B7dVxOS

That speed isn’t just football speed either: it’s track speed. Thornton won the Class 2-A state title this year in the 400 meters.

Thornton becomes a dynamic fourth wide receiver in the 2018 class that includes Jalynn Williams, Corey Gammage and JaMarr Chase, a 4-star who committed on Sunday.

The Gators may not be done yet at the position yet either.

Florida could land two more receivers in the 2018 class in 4-stars Jacob Copeland and Anthony Schwartz. Copeland was scheduled to commit at the Under Armour All-American Game, but announced on Twitter he was moving up his commitment after going to Friday Night Lights.

Schwartz meanwhile recently announced his top six schools, with Florida on the list.

If the two do commit, they would add to what is now a top-10 class according to the 247Sports composite. It’s a meteoric rise after the class was ranked in the 40s just a few weeks ago.

But that’s what additions like 5-star QB Matt Corral, Thornton, and the five others in the 2018 class that committed this week can do. Florida now has serious momentum on the recruiting trail, right as it heads in to the start of it’s football season, with kick off in Dallas against Michigan just five weeks away.