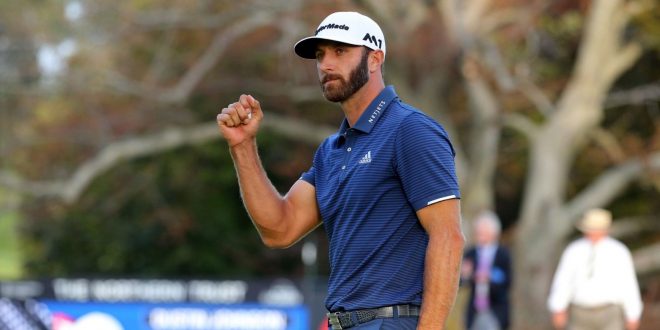 Aug 27, 2017; Old Westbury, NY, USA; Dustin Johnson reacts after putting for birdie and the win on the eighteenth hole during the first playoff hole against Jordan Spieth (not pictured) during the final round of The Northern Trust golf tournament at Glen Oaks Club. Mandatory Credit: Brad Penner-USA TODAY Sports

In a playoff match-up between the top two ranked golfers in the world, Dustin Johnson showed why he is golf’s number 1 with his Northern Trust victory over Jordan Spieth.

The first event of the FedExCup Playoffs came down to what every golf fan wanted to see: Dustin Johnson and Jordan Spieth playing a sudden-death hole, winner take all. Spieth was in the lead for much of the tournament, but Johnson wouldn’t accept a loss. He stayed in the race, and eventually forced a tie-breaker with an impressive putt at the 17th hole. While Spieth played well, Johnson put on an elite showing to win the Northern Trust. At the start of the 18th hole, Johnson decided to take an extremely aggressive shot. Using his fantastic driving ability, he stepped up to the tee and drove the ball 341 yards. The ball flew over a lake and landed perfectly on the fairway. By cutting across the lake, Johnson put himself only about 93 yards from the hole. Spieth, on the other hand, was still about 180 yards from the hole after his first shot. Not only was Dustin Johnson’s drive remarkable, he then proceeded to land the ball a mere three feet from the hole with his next shot. From there, he simply tapped the ball in for a winning birdie.

Has @DJohnsonPGA ever played a more perfect hole than that playoff birdie? pic.twitter.com/9gUOrTINTB

Here is Dustin Johnson on the victory.

After Johnson gave his reaction to the big victory, Jordan Spieth explained how he felt about losing to Dustin Johnson despite a strong outing.

In recent years, the number one ranking in golf has been passed around between Jordan Spieth, Rory McIlroy, Jason Day, and Dustin Johnson. Right now, its Johnson’s time to dominate. This PGA season, he has held the number one ranking for 27 out of the total 34 weeks of the season. Johnson only seems to be improving. His driving power has always been the strongest part of his game, but his wedge game and his short game are quickly improving. The world of golf may be watching Dustin Johnson dominate for the foreseeable future.

The next FedExCup playoff on the PGA tour is the Safeway Open. which begins October 13th in Napa, California. Will we see another strong outing for Dustin Johnson or will Jordan Spieth get the best of him this time?

Previous Mayweather Goes Undefeated, McGregor Puts Up a Fight
Next 2017 US Open Preview