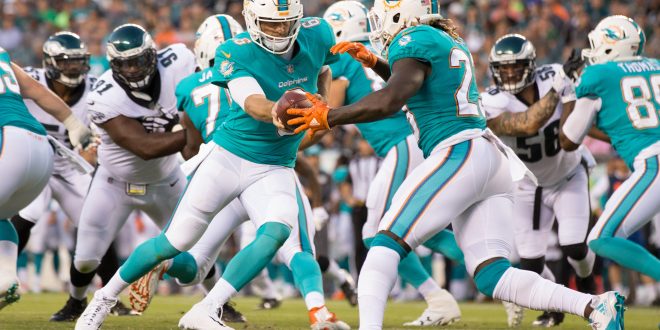 The Miami Dolphins have been adjusting to their new starting quarterback, Jay Cutler. Cutler signed with the Dolphins on August 6, in the wake of Ryan Tannehill’s season-ending knee injury. Cutler’s previous relationship with Dolphins head coach Adam Gase made Miami appealing enough for him to end his brief retirement.

Jay Cutler is already familiar with Dolphins’ head coach Adam Gase. Gase was the offensive coordinator for the Bears during Cutler’s 2015 season in Chicago. In that time, Cutler had one of his career-best seasons, throwing a completion rate of 64.4%. Cutler had his second-best interception rate that season as well. Dolphins fans are hoping to see similar numbers from Cutler as he works under Gase this year.

Cutler has been making adjustments as he gets used to playing with Miami’s offense. Cutler is connecting well and often with wide receiver DeVante Parker. Parker has been targeted consistently throughout the preseason, and it appears he will remain a target throughout the regular season. Parker has performed well with Cutler and had a particularly incredible performance against the Eagles last week.

Getting Familiar in Miami

Cutler feels he has become familiar with Miami. He feels he is now comfortable with the offense. The Dolphins have had joint practices with Philadelphia, which Cutler said has helped him adjust to more game-like situations.

Miami will play their final preseason game this Thursday against the Minnesota Vikings. The regular season begins Sunday, September 10 against the Tampa Bay Buccaneers.

Born and raised at the ballpark! Typically quiet- until it comes to sports. I'm a South Florida native with a passion for baseball nearly as strong as my faith. Grew up in garnet + gold, turned out sporting orange + blue. Likely to be found with a camera. And yes, I take food pictures.
@victoriarossman
Previous Strong First Win for USF
Next Rays Start Off Three-Game Series With A Great Win