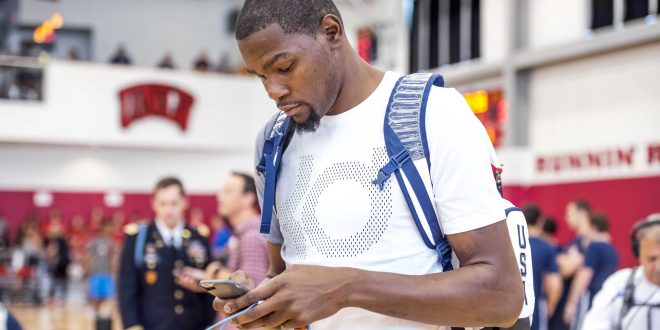 Kevin Durant, who is known to have an active presence on Twitter and other social media sites, apologized for “going too far” on Twitter when responding to a fan’s reply to his own tweet. As seen in the images below, Durant responded to a fan’s question about him leaving OKC for reasons other than “winning a championship” with criticism of former Florida Gator head coach and current Oklahoma City head coach Billy Donovan and the Thunder’s roster.

It is not clear whether or not Durant thought he was using another Twitter account to respond to the tweet, rather than his own verified account. Durant apologized for the tweets in a statement at Tech Crunch in San Francisco on Tuesday afternoon. The full response can be seen below.

Oklahoma City PF/C Enes Kanter responded to the Twitter snafu with his own statement saying, “I don’t care what anyone says. Oklahoma City Thunder is the best and most professional organization in the NBA and got the craziest fans.”

The Oklahoma City Thunder open up their season at home on October 19 against the New York Knicks, while Durant’s Golden State Warriors debut on October 17 at home vs. James Harden, Chris Paul and the Houston Rockets.