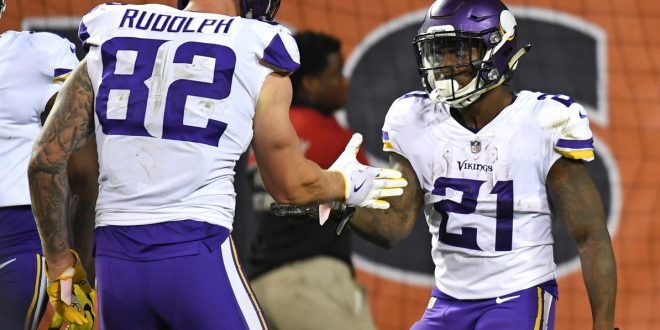 The Minnesota Vikings topped off the Chicago Bears 20-17 on Monday Night Football. With only 12 seconds left in the game, Kai Forbath came in clutch and made a 26-yard field goal that landed the Vikings a win.

On a night in which the spotlight was on Mitch Trubisky as he made his debut as the starting quarterback for the Bears, the Vikings were able to steal the show. Late in the fourth quarter, the rookie threw an interception which led to the game winning field goal by Minnesota.  Trubisky ended the night 12-for-25 for 128 yards, a touchdown pass, an interception, and a lost fumble.

The rookie’s first career touchdown pass was a 20-yard strike to Zach Miller, who caught the ball in the end zone.

Keenum steps in for injured Bradford

Vikings coach Mike Zimmer made a quarterback change after watching Sam Bradford limp through the first half of the game. This was Bradford’s first appearance in three games due to a knee injury; Zimmer stated that he aggrevated his knee during the first half.

Despite an injured quarterback, the Vikings were able to grab a win as Case Keenun took over for Minnesota. Keenun was able to throw a touchdown on the team’s first possession of the third quarter, finishing off a 13-play, 75-yard drive with a 13-yard pass to Kyle Rudolph in the end zone.

While Keenum came in a rescued the Vikings, he remains humble and states that this is just doing his job.

The Vikings are back home as they face the Green Bay Packers on Sunday afternoon.

The Bears travel to Maryland on Sunday as they face the Baltimore Ravens.