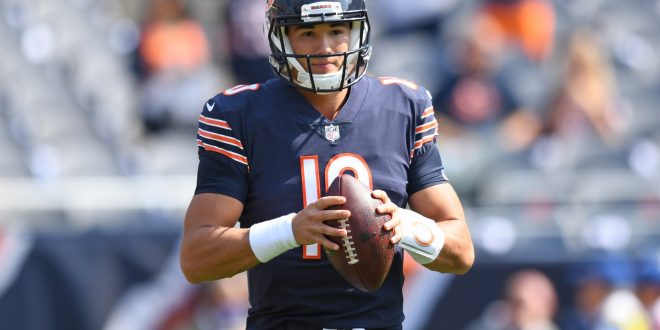 The Minnesota Vikings (2-2) will head to Soldier Field tonight to take on the Chicago Bears (1-3) in an NFC North divisional battle. Green Bay (4-1) and Detroit (3-2) are currently leading the division, so winning this match-up is essential for both squads to keep pace.

The quarterback is the most important position in all of sports. Having a great quarterback can propel average teams to new heights. On the other hand, having an inadequate quarterback can lead to the demise of a season or even ruin a franchise for a period of time.

Both teams will be starting a different quarterbacks tonight from last week. Sam Bradford  is expected to play for Minnesota after missing the past three weeks with a knee injury. Injuries have derailed Bradford’s career. The former number one overall pick in the 2010 NFL Draft has only played a full slate of games in two out of his eight professional seasons. The Oklahoma product has torn his ACL twice, but is a very effective signal caller when healthy.

Bradford has acknowledged that there is always going to be a bit of discomfort in his knee, but for the most part, he feels good.

On the other side of the field, rookie quarterback Mitchell Trubisky will make his NFL debut. Many scouts questioned the Bear’s decision to trade up one spot to snag the North Carolina product. However, the number two overall pick in the 2017 NFL draft has lofty expectations after having a highly productive preseason.

Trubisky is ready to embrace the opportunity. “I’m excited. I’m just going to take it day by day and prepare as hard as I possibly can for every single look and situation we can get on Monday,” said Trubisky (per ESPN.com).

Trubisky will be tasked with facing a top ten defensive unit in football. The Vikings give up 71.2 yards per game on the ground, which is the third least in football. They also rank first in the league in third down defense, stopping opponents 74.4% of the time.

The Bears running attack has been the bright spot for them this season. Jordan Howard and rookie Tarik Cohen have been dominating opposing defenses. The Bears have ran for over 100 yards in three out of their four game, with the lone dud in a blowout loss against the Buccaneers.

Vikings head coach Mike Zimmer knows that despite their 1-3 record, the Bears have a quality team and will pose a legitimate threat to Minnesota.

The Vikings are also without their star rookie running back Dalvin Cook, who is out for the season with a torn ACL.

Expect the Bears to rely heavily on their running game, with plenty of check-downs to Tarik Cohen. Trubisky has an incredibly strong arm, so it wouldn’t be surprising if they took some deep shots to elongate the Vikings defense. Minnesota is currently the three-point favorite, but Chicago does have home-field advantage. With Bradford likely back overseeing the offense, Minnesota should be able to control the pace and flow of the game.