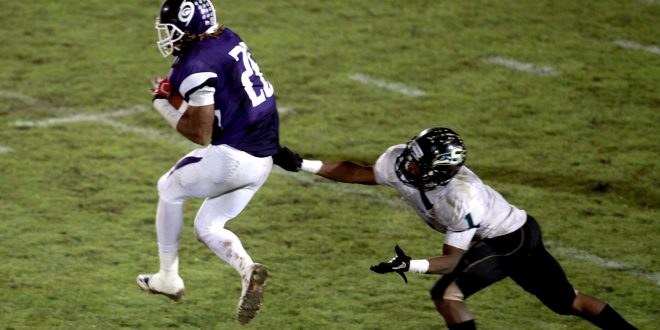 The Gainesville Hurricanes head out on the road this Friday to face district opponent Leesburg.

Both Gainesville and Leesburg’s only conference loss came against the Vanguard Knights, who are undefeated sitting at 6-0 on the season.

Hurricanes Looking To Bounce Back

The Hurricanes last game was against the Vanguard Knights, falling at home by a score of 31-24. This was the closest game Vanguard has played against an opponent all season. Although they lost, Gainesville head coach Mark Latsko was proud of the way his team played. After the loss, the Hurricanes need to refocus themselves for their game this Friday.

Gainesville has leaned on their strong running game all season. Senior running back Willie Mcknight and Kinnzon Hutchison both have five rushing touchdowns on the season. In the passing game for the Hurricanes, junior wide receiver Jalen Kelsey has made a name for himself. Jalen has caught 32 passes for 676 yards and five touchdowns.

The offense of the Hurricanes will need to have a strong showing this Friday if they wanna keep up with Leesburg’s high scoring offense that is averaging nearly 35 points per game this season.

In charge of trying to slow down the potent attack of the Yellow Jackets is junior defensive back for D’Verik Daniel. Daniel leads the team with 43 tackles and senior free safety Julien Cromwell has 40 tackles on the year.

The game will take take place at Leesburg High and kickoff is set for 7 PM.