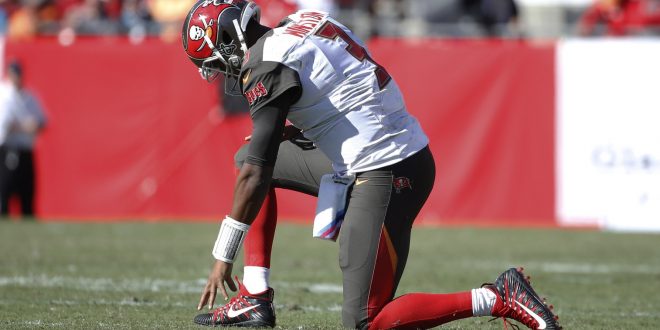 Jameis Winston and the Tampa Bay Buccaneers have had a rough start to the 2017 season.

Week 8 in the NFL wraps up tonight with a Monday Night match-up between the Denver Broncos and the Kansas City Chiefs. Now at the half way point of the season, it is time to take a look at what teams are trending up and down.

There are teams like the New England Patriots that one just expects to see at the top of the standings. But so far the 2017 season has come with a number of surprises. Injuries to big name players like Aaron Rodgers, Odell Beckham Jr., and J.J Watt have shook up the league.

There have been many surprises so far this season, but none greater than the shuffling of the NFC South.

Surprise: The fall of the Tampa Bay Buccaneers

After finishing second in the NFC South in 2016 (9-7), the Bucs were predicted to be on the rise. Before training camp, they were at 33-1 odds to win the Super Bowl and many felt that a division title was possible.

Former number one draft pick Jameis Winston showed growth heading into his third season. The addition of veteran wideout DeSean Jackson and young defensive talent had fans of the team excited for what 2017 could bring.

But 2017 has been a different story. Currently in last place with a 2-5 record, Tampa Bay is not looking good.

In a division loss the the Carolina Panthers, the Buccaneers showed no signs of life on offense. Only scoring a field goal at the end of the second quarter. Overall the Bucs punted the ball six times, has two interceptions and one fumble.

Hopefully, Tampa can stop the four-game losing streak next week against the Saints.

Surprise: Jacksonville gets it done

The 2016 season was not kind to the Jaguars. Finishing last in their division with a 3-13 record, 2017 did not look hopeful.

During the offseason, the Jaguars drafted LSU running back Leonard Fournette and signed him to a four-year contract. This was the only notable signing, with the rest of the roster mainly remaining the same.

Currently sitting atop tied with the Tennessee Titans, the Jaguars are in position to win the AFC South. Better on the road than at home, Jacksonville already has more road wins (3) than total wins from the previous year.

4-3 might not seem like a a hot start, but in a division that is very even, every win counts.

Fournette is the biggest difference making. Consistently leading the team in rushing and coming up big when needed.

Coming off of a bye week, the Jaguars will look to keep the momentum rolling into the second half of the season against the Bengals.

The start of the 2017 did not look for the New Orleans Saints. After starting 0-2, the team was on shaky ground. A 7-9 2016 season was looming in the back of their minds.

Drew Brees and the offense found a rhythm while the defense was able to keep the team in games. The Saints came up big against divsion rival Carolina and shut out the Dolphins 20-0 in week 4.

Their bye week during the fifth week of the season didn’t slow the team down. Grinding out wins against the Packers and Bears, the Saints are currently 5-2 and first in the NFC South.

This first half turn around isn’t as easy as one would think. According to ESPN Stats and Information, the Saints had the toughest strength of schedule for the first seven weeks.

But the team’s success is not enough for quarterback Drew Brees.

With an easier second half schedule, the Saints hope to continue this improbable run.

The biggest surprise of the NFL season may just be the Philadelphia Eagles and their quarterback Carson Wentz. The Eagles are currently a league best 7-1 and show no signs of slowing down.

Quarterback Carson Wentz is one of the main reasons for the team’s success.

So far this season Wentz has thrown for 2,603 yards and 19 touchdowns. Additionally, his quarterback passer rating is an impressive 101.6.

The only player with more yards than Wentz this season is Tom Brady.

Upcoming games for the Eagles include the Broncos and the Cowboys. If Wentz can have standout performances against these teams, the MVP award could be his.