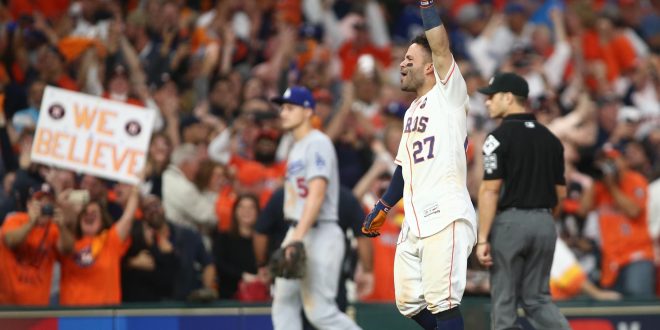 In one of the most exciting games in World Series history, the Houston Astros defeated the Los Angeles Dodgers by a score of 13-12 to take a 3-2 series lead.

After seeing a low-scoring pitching battle between Dallas Keuchel and Clayton Kershaw in Game 1, Game 5 showed quite the opposite. Kershaw pitched for 4.2 innings and allowed 4 hits, 6 earned runs and had 2 strikeouts. Keuchel only pitched for 3.2 innings and gave up 5 hits, 3 earned runs and struck out 4 batters. Game 1 between the two star pitchers lasted just about two and a half hours and had 4 combined runs. Game 5 lasted a whopping five hours and 17 minutes and had the teams combine for 25 total runs.

Kershaw said that Game 5 was a “tough one to lose” and that the Dodgers offense was amazing despite what he gave them.

Game 5 between the Astros and Dodgers had no shortage of big plays. Both teams had 14 hits, and there were 7 hits that were either game-tying or lead-changing. After the Dodgers took a 4-0 lead, the Astros were able to tie the game in the 4th inning behind a Carlos Correa double and a three-run homer by Yuli Gurriel. The Dodgers immediately responded in the top of the 5th with a three-run shot by Cody Bellinger, putting LA up 7-4.

Houston star Jose Altuve continued his clutch play as he had a three-run HR to tie the game again at 7-7 in the bottom of the 5th. From there the Dodgers would go up 8-7 in the 7th inning, and the explosive Astros would score four runs in the bottom of the 7th to take an 11-8 lead. Yasiel Puig and the Dodgers had some heroics in the 9th inning, rallying to score three runs to tie the game at 12. The game headed into extra innings where Alex Bregman had a walk-off single, giving the Astros a 13-12 win.

What were you doing at 23? @ABREG_1 is doing THIS. #WorldSeries pic.twitter.com/FS3u4XxTJw

Alex Bregman said that Houston is “built” for games like this.

With the Astros now up 3-2, the series will shift back to Los Angeles where the Dodgers will try to force a game 7 at home. Rich Hill will take the mound for the Dodgers and Justin Verlander will start for Houston in game 6. If LA pulls out a game 6 victory, they will have game 7 at home. Game 6 starts at 8:20 p.m. ET Tuesday night.

Rays Back to Praciticing at the Trop

Arguably the biggest roadblock to the MLB starting up again is money. Players want all …