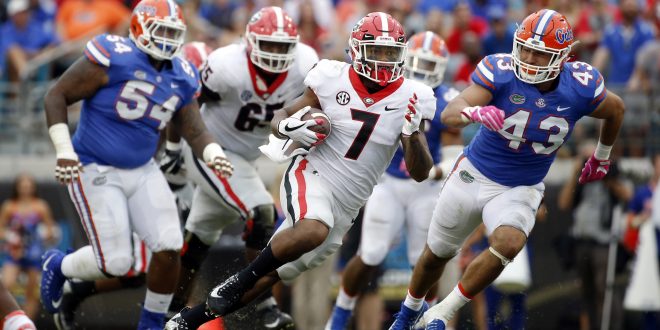 The SEC had a weekend full of high-scoring games. There were exciting finishes all around, with some wins coming down to the final seconds of play.

Ole Miss seemed to have control of this game early on. The Rebels had a 24-point lead in the first half. However, turnovers were key in this game, as the Razorbacks scored two touchdowns on two turnovers before halftime. Ole Miss extended their lead in the fourth quarter, but a fumble proved costly. Arkansas’ Kevin Richardson ran back the fumble for a 22-yard touchdown, bringing the Razorbacks within 2. Arkansas would come back to beat Ole Miss with 0:04 seconds left in the game, thanks to a 34-yard field goal.

Georgia was dominant in this game for all 60 minutes. Running back Sony Michel was a standout for the Bulldogs, rushing 137 yards on six carries with two touchdowns. Georgia scored on their first three possessions, quickly taking a 21-0 lead. Florida was held scoreless until the final few minutes of the game, scoring a touchdown with 2:42 left. The Gators lost their third game in a row, falling to 3-4 on the season. Florida’s head coach Jim McElwain was fired following the loss. The university made the announcement on Sunday. Georgia remains undefeated.

Florida's 35-point loss to Georgia was its largest margin of defeat in an SEC conference game since 1990 (Steve Spurrier's first season). pic.twitter.com/lpwtIUOUIC

South Carolina took a win over Vanderbilt in a game full of penalties. Vanderbilt racked up 10 penalties total in the game. Two of their players were ejected due to targeting calls. South Carolina’s quarterback Jake Bentley threw one touchdown and ran for two. This win for the Gamecocks keeps them in the SEC East race.

3rd straight 100yd rush game; 12th of his career – most by a QB in SEC history.@HailStateFB's @nickfitz07 is the #SECFB Co-Offensive POTW. pic.twitter.com/Q2urhn58sL

Kentucky beat Tennessee for the first time in six years. Despite four fumbles for the Wildcats, they were able to pull off the win in the final seconds of the game. An 11-yard touchdown run and a successful two-point conversion in the final 0:33 seconds of the game was just enough to put Kentucky on top. Tennessee attempted a Hail Mary pass in their final possession, but came up just short of the endzone.

Missouri’s offense exploded against UConn. The Tigers totaled 583 offensive yards, with quarterback Drew Lock throwing for 377 yards and five touchdowns. This was the first time the Tigers have won back-to-back games since 2015.

Born and raised at the ballpark! Typically quiet- until it comes to sports. I'm a South Florida native with a passion for baseball nearly as strong as my faith. Grew up in garnet + gold, turned out sporting orange + blue. Likely to be found with a camera. And yes, I take food pictures.
@victoriarossman
Previous Texans Players Respond to Owner’s Comment
Next Monday Night Football Preview: The Chiefs Host the Struggling Broncos