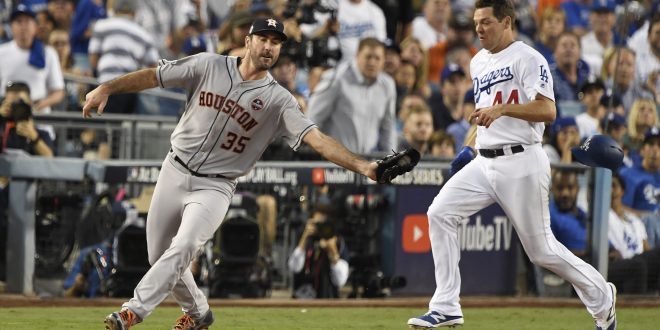 World Series Shifts Back to LA for Game 6

Following a wild Game 5 of the World Series, the Houston Astros now hold a 3-2 series lead over the Los Angeles Dodgers, after winning 13-12 in 10 innings on Sunday night. Tonight the World Series shifts back to the Dodger Stadium in Los Angeles for Game 6. The Dodgers hope to bounce back after blowing a 4-0 and 7-4 lead in game 5. They need a win tonight to even the series and send it to a game 7. Meanwhile, the Astros look to ride off of the momentum from their thrilling game 5 victory. With a win in tonight’s game 6, they would secure the first World Series title in franchise history.

Both teams have named their starting pitchers ahead of game 6 tonight. It’ll be a battle on the mound between Rich Hill and Justin Verlander. Both pitchers previously faced each other in game 2 of the World Series, which Houston won 7-6 in 11 innings.

Rich Hill has only pitched 4 innings in this World Series, all coming at the beginning of game 2. In those four innings, he allowed one run on three hits and had a total of seven strikeouts. His record in the playoffs is 0-0 and 2.77 ERA, and while they lost game 2 of the World Series, the Dodgers won in his starts for the NLDS and NLCS. Hill knows the importance of tonight’s game, particularly as the starting pitcher looking to stifle the Astro’s offense. It’s win or go home for the Dodgers, and Hill knows he has to leave it all on the field tonight.

Justin Verlander also knows that tonight’s game will be intense for both teams. In the postseason, Verlander has a 4-0 record and 2.05 ERA. In game 2 of the World Series, he pitched 6 innings and gave up only two hits. However, those two hits were costly for the Astros and resulted in home runs from both Joc Pederson and Corey Seager.

Part of who wins tonight will come down to the pitching battle between Hill and Verlander. Verlander is unbeaten when starting since he joined Houston at the end of August and some may say he has the edge. Regardless, we’re in for another exciting battle tonight.

History for Astros, Survival for Dodgers

Before this World Series, the Houston Astros had never won a game. In fact, this is only their second appearance in the World Series, after being swept by the Chicago White Sox in 2005. Now they’re just one game away from being crowned the 2017 World Series Champions.

A win tonight would do just that. However, the Astros acknowledge the implications of losing tonight’s game. MLB has noted that since 1985 – when the League Championship series turned to a best-of-seven format – the road team that loses game 6 has only won game 7 in two out of 16 occasions.

It’s important for the Dodgers to remain focused and win tonight for their survival in the series. A win would also shift momentum in their direction, especially since a potential game 7 would come back to Dodger Stadium.

In Verlander’s last start in game 2, the Dodgers managed to get two good hits out of him. In order to stay alive, they are going to have to make the most out of the Astros’ bullpen.

The World Series could come to an end tonight in game 6. The Astros currently hold the 3-2 lead in the series and a win would see them crowned as champions and end the 2017 MLB season.

Coverage here on ESPN Gainesville begins at 7pm. The game will be broadcasted live from Dodger Stadium on FOX at 8:20 pm.

@gabymno
Previous New MLB Managers in Philly and DC
Next Florida Is Struggling, But So Is FSU