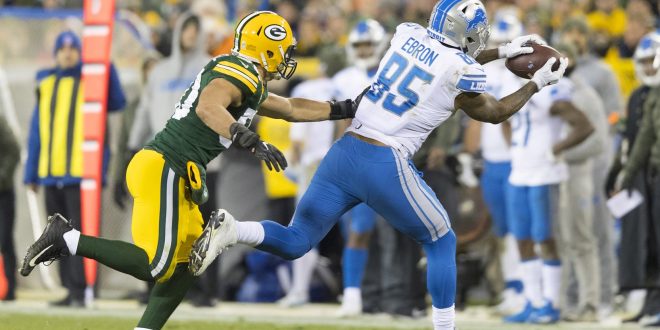 Traveling to Lambeau Field is usually scary for the Lions. Historically, the odds were against them. Prior to this past Monday, the Packers have won 24 of their last 25 games against the Lions at home. The Lions came into the game at 3-and-4. Coming off a three-game losing streak, this win was essential to getting them back on track. On the other hand, the Packers came in to this match up at 4-and-3. Since Aaron Rodgers getting injured against the Vikings, the Packers haven’t been able to buy a win. The Lions dominated in a division win that puts them a spot above the Packers now.

The Packers’ offense struggled to put numbers on the board. The first drive of the game showed how their entire night would go. They marched down the field only to have a field goal blocked. From there it took them until the last seconds of the first half to score. Going into half time the Packers barely scrounged three points. The Packers converted 2-of-9 third down opportunities. Their offensive line was breaking down leading to three sacks on Brett Hundley. Their longest run was for 12 yards. Hundley took care of the ball not throwing any interceptions. However, he couldn’t find any big plays down field. Randall Cobb’s 46-yard catch and run was the biggest play of the night. Cobb and Davante Adams were the only two receivers to bust a measly 50 yards on the night. It took until the fourth quarter for the Packers to score a touchdown. Hundley threw for 245 yards on 26-of-38 and no touchdowns. The stats don’t lie. The Packers were simply outmatched in this game. After the game, Hundley commented on the team’s inability to score.

Capitalizing on a weak opponent

The entire game the Lions were marching, with ease, down the field. The Lions didn’t have to punt the ball once this game. A big reason they were able to move the ball so effectively is Golden Tate. On several occasions the Lions would dump the ball off to Tate and watch him chew up 20+ yards. Tate leads the NFL in yards after the catch. This allowed Marvin Jones to be a deep threat. Both Tate and Jones racked up over 100 yards on the night. Theo Riddick enjoyed some catches from the backfield with 62 yards. Eric Ebron also got involved with 35 yards. Matt Stafford had a field day picking apart the Green Bay defense. He ended the night with 361 yards throwing and two touchdowns, only getting sacked once.

The only hiccups in the Detroit offense was Ameer Abdullah’s two fumbles; only one of which was recovered by the Packers. Detroit’s run game was sub-par at best and the offense relied on Stafford’s arm. The running back collectively could only muster up 64 yards on the night. The Lions rolled through the struggling Packers with Stafford’s success at the helm. Final score: Lions 30 – 17 Packers.

Dylan Glicksman is a second year Sports/Media Journalism major at the University of Florida, out of Melbourne Beach, FL.
Previous Gators Soccer To Host NCAA Action
Next Jameis Winston Shut Down by Team Doctors