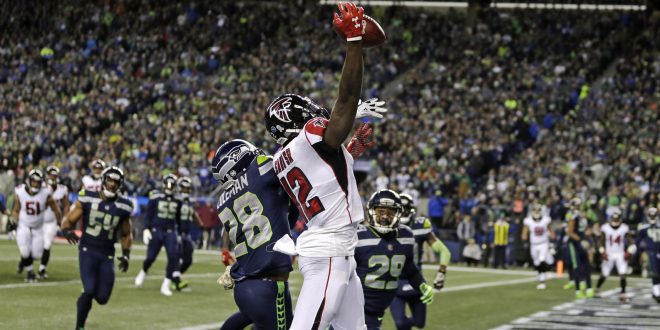 Atlanta Falcons' Mohamed Sanu (12) reaches to snag the ball for a touchdown on a pass reception as Seattle Seahawks' Justin Coleman defends in the first half of an NFL football game, Monday, Nov. 20, 2017, in Seattle. (AP Photo/Stephen Brashear)

The Falcons Beat The Seahawks in Monday Night Football

The Atlanta Falcons improved their record to 6-4 after a 34-31 victory over the Seattle Seahawks in a tough visit on Monday Night Football.

Atlanta started the game by scoring the first touchdown of the game. Tevin Coleman got the rushing touchdown from Seattle’s one-yard line. This was the third touchdown for Coleman this season.

Less than two minutes later, Russell Wilson threw a poor pass to the middle which ended up being intercepted by Desmond Trufant. Trufant run the ball right away through the right side to Seattle’s 40-yard line.

Then the Falcons extended their lead to 14-0 after Matt Ryan sent the 2-yard touchdown pass to Mohamed Sanu. Sanu beat Shaquill Griffin with a one-handed reception when battling for the ball on the right side of the end zone.

With less than three minutes to play in the first quarter, the Seahawks got on the scoring board thanks to a touchdown pass by Wilson to Jimmy Graham from the 4-yard line.

Things did not look good for the Seahawks early in the second quarter. Both Takkarist McKinley and Courtney Upshaw applied some pressure on Wilson and forced him to fumble the ball. Adrian Clayborn grabbed the return and extended the lead for the Falcons 21 to 7. Then the Seahawks got closer in the board thanks to a 30-yard field goal made by Blair Walsh.

Wilson’s Agility Was Not Enough for The Seahawks

With less than six minutes to play in the second quarter, Wilson used his amazing footwork to make the horizontal run and run the ball to the end zone. This was the second rushing touchdown for Wilson this season.

The Falcons closed the first half by responding right away with a 44-yard field goal made by Matt Bryant.

Half through the third quarter, the Falcons extended their lead once again to 31-20. Ryan stepped back a little bit to create his own space and made a 25-yard touchdown pass to Levine Toilolo. This was Toilolo’s first touchdown of the season.

The Seahawks responded quickly in less than one minute with a touchdown pass from Wilson to Doug Baldwin. Wilson took advantage of the space created by the offensive line and threw the ball to Baldwin, who made the cut through the middle to make the 29-yard reception.

On Week 12, the Falcons will host the Tampa Bay Bucaneers while the Seahawks will be visiting the San Francisco 49ners.

Journalism student at the University of Florida. Venezuelan and future sports journalist.
@joseso2793
Previous After Getting Much Needed Win, Gator Football Back In Swamp To Face FSU
Next Oklahoma Quarterback Baker Mayfield Loses Captaincy