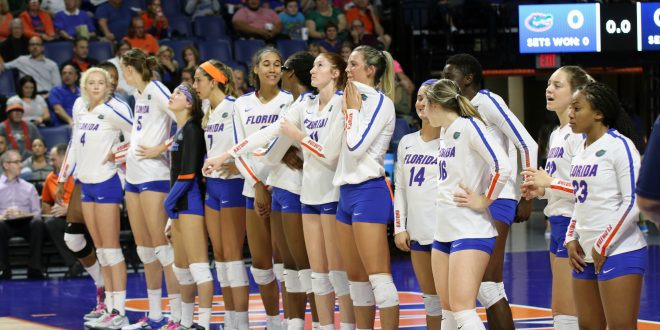 The Florida Gators will come back after a week off to play the UCLA on Friday in the Sweet 16 of the NCAA Volleyball tournament. The Gators won the first two rounds handily only dropping one set of the seven they played.

Mary Wise continues to make her the history books and do something no other female coach has done in D1 volleyball: win it all.

The Bruins will be a different monster to overcome as they have dominated their competition as well. This third round matchup will be the toughest test for the Gators up to this point in this tournament. Florida and UCLA have not faced off since 2006 when the Bruins swept Florida in three sets. The Gators will look for revenge when the match begins at 4 PM in the O’Connell Center.

The Gators will look to remain tough defensively against a strong Bruin offense. Florida’s defense held their first two opponents to an average of .097 hitting percentage. With strong backline play from Libero Caroline Knop and Paige Hammons in the first round, Florida held Alabama State to a ridiculous -.014%.

Rhamat Alhassan will need to showcase her stifling defensive showings as she did in regular season. Alhassan remains the national leader in blocks per set with 1.74. Registering just one solo block in last week’s games, she is due for an impactful defensive showing.

So far, the redshirt senior Shainah Joseph has lead the way offensively. Joseph was unstoppable in both games getting nine kills in three sets in Round 1, and 19 kills in four sets in round 2. While Joseph’s play has been out of this world up to this point, the Gators will need to call on other players to help her carry the load.

Raechel Kramer has been keyed on in the first two rounds only getting 11 total kills. As teams begin to focus more on the outside with Joseph and Carli Snyder, Alhassan and Kramer will look to take advantage in the middle.

As reliable as the Gator defense has been, it will be hard to stop the physical play of the Bruins on Friday. The Bruins come to O’Connell Center with a determined offense that sets up their outside hitters consistently.

Senior outside hitter Reily Buechler has been inhuman during the first two rounds. Recording 13 kills in three sets against Austin Peay in the first round and notching 26 kills in the second round shootout against Cal Poly. Buechler also had eight service aces last week with 7 of them coming against Austin Pey.

UCLA also had strong showings from their younger core as well. True freshman Jenny Mosser shined in the first match with nine kills and five digs. Sophmore Madeleine Gates took the reigns in the second round. She accounted for 13 kills and three blocks from the middle.

Many players on this UCLA team is well-rounded and comes at their opponents in a variety of ways. The Gators cannot afford to get frustrated too early as they have in the past. As they move through the tournament, UF will face stiffer competition and must maintain their confidence in the face of adversity.