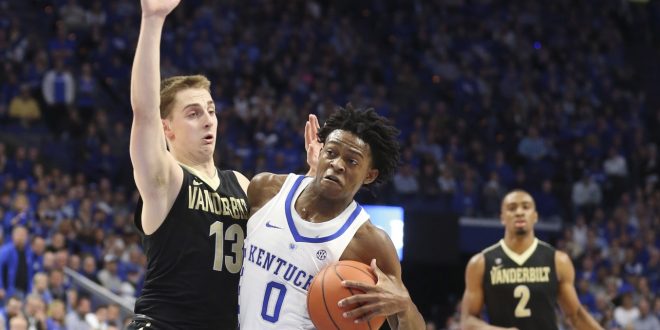 On Saturday the Kentucky Wildcats take on the Vanderbilt Commodores in Nashville to decide who will improve their SEC record.

The Wildcats have gone 13-3 in the season and are coming off of a wild 74-73 win against Texas A&M on Tuesday.  Starting point guard Quade Green was out Tuesday and hasn’t practiced all week due to a back injury. Coach John Calipari seemed skeptical over whether or not he’d play Saturday or even Tuesday against South Carolina. If that’s the case, Shai Gilgeous-Alexander will take over. But Gilgeous-Alexander is hardly a replacement, ranking second in the conference in steals (2.2 per contest), sixth in assists (4.3 per game) and ninth in free-throw percentage (84.5 percent).  Jemarl Baker has started recovering from knee surgery but likely won’t be in this season.

Perhaps the current biggest questions regarding Kentucky basketball pertains to Jarred Vanderbilt. The 6-foot-8 forward has been out for three months with a leg injury but resumed practice this week. After Tuesday’s win Calipari said the following about Jarred Vanderbilt: “I basically told him, Listen, when you go in, you’re going to play seven or eight minutes a half, limited minutes for a while. I’m going to put you in there, let you run around, let you feel good about yourself and you’re out. But he’s going to have to make that decision. It’s more mental. I mean, he can play. He couldn’t play forty minutes or anything like that, but he can play.”

Regardless of the fate of those players, Wildcat fans have plenty of reasons to be optimistic: one being the fact that Kentucky has gone 12-4 against the Commodores since Calipari has been head coach.

Our #TBT is a nod to @JohnWall who scored our last five points and had a game-clinching block with 3⃣ seconds to go in our first trip to Vanderbilt under @UKCoachCal. All-time we're 5⃣➖2⃣ under Cal in Memorial Gym. Next up? Saturday at 4 p.m. on ESPN. pic.twitter.com/8ZJJKsyeGk

So far, Kentucky has gone 3-1 in the SEC, only falling to Tennessee.

Vandy looking to get back on track

Vanderbilt has the opposite SEC record, only managing to beat Alabama. The 6-10 Commodores have had a tough year compared to a season ago when they were the top-shooting 3-point team in the league. This past Tuesday they lost to Tennessee with a score of 92-84 despite freshman Saben lee scoring 21 points. Head Coach Bryce Drew puts a lot of weight on senior forward Jeff Roberson who averages 14.8 points and eight rebounds a game. Other players to watch out for are Matthew Fisher-Davis and Riley LaChance.

Kentucky is favored to win this matchup but let’s see if the home advantage helps out Vanderbilt.

The Wildcats take on the Commodores at 4 p.m. at Memorial Stadium in Nashville.